Lee Vranna's personal motto is "Sapere aude *.....et goofy." He is a long-term husband, doctor, and dad who lives in the Pacific Northwest.

“A whimsical tale with plenty of zaniness that revolves around a sentimental and philosophical core.”
– Kirkus Reviews 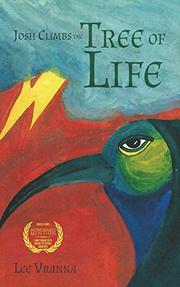 Josh Climbs the Tree of Life

A debut novel follows a teenager and his curious involvement with celestial beings.

Josh, a lover of marijuana, disc golf, and Internet pornography, seems an unlikely guy to be recruited for anything, let alone an important mission from the gods. This is, however, exactly what happens. With a need for a mortal to hide the “Secret Knowledge picked from the Tree of Life,” Thoth, the “divine librarian and scribe of the gods,” feels he has found his man. As Thoth explains in a committee meeting that includes Athena and Eshu, “Our goal is to find the individual on Earth who is LEAST likely to benefit from possessing the Secrets; I think we have succeeded.” Persuading the high school student to accept the task, which involves holding a number of CDs that contain “all of the world’s secret knowledge” in exchange for “the best ganja bud you can imagine,” proves to be no challenge at all. Josh has other concerns. He hates school (“It’s not that he wasn’t smart, but the material they tried to teach him was wretchedly boring”). And as his dementia-suffering grandfather comes to stay with the family, Josh can only escape to his favorite distractions for so long. Problems arise, however, when Thoth decides he likes to hang out with the boy and Josh develops an interest in learning about the knowledge he protects. If the idea of an ancient Egyptian deity befriending a high school slacker sounds silly, that’s because it is. Free-wheeling throughout, the narrative nevertheless tackles serious topics in an unapologetically playful manner. Discussing enlightenment, Thoth explains that “One of the incontrovertible truths is that nature abhors a vacuum, and the most abhorrent vacuum of all is an empty cranium.” The lesson occurs while he and Josh are settled in for an evening of video games. Though the description of Dionysus as a “snot-licking drunk” may not be humorous to all readers, the comedy is a vehicle for the characters to build relationships, which in the end manage to be touching. Everyone needs a friend; so what if Josh’s happens to have the head of a bird and comes bearing “unbelievable” weed?

A whimsical tale with plenty of zaniness that revolves around a sentimental and philosophical core.

The Brothers Karamazov and Skinny Legs and All

"Love all God's creation, both the whole and every grain of sand."