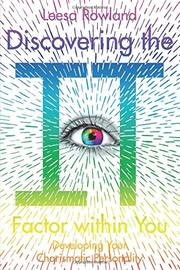 Discovering the It Factor within You

Actress and animal activist Rowland explores the nuances of unlocking one’s charisma in order to have a richer, happier, and more fulfilled life.

According to the author, charisma is “an amalgamation of your inherent talents and the passion with which you were born.” In 23 chapters, she covers every aspect of this trait from the spiritual to the sexual to the professional, and also explores the relationship between charisma and karma—separate forces that she says an enlightened being can influence to act in tandem. She warns against the dangers of using charisma for evil, however, citing examples such as Adolf Hitler and Jim Jones, and offers numerous examples of celebrities, such as Oprah Winfrey, who have used the trait for positive effects. The book is structured well, as it presents the overall concept effortlessly and gradually delves into its nuances. When the author presents details of various energy-related healing and releasing practices, such as reiki, toward the end of the book, it feels like a logical part of a natural narrative sequence. Rowland’s story of her own tragic personal history, including the poisoning of her mother by a deranged lover and the collapse of her own romantic relationships with famous actors, is woven into the book, resulting in an unusual, inspirational tapestry. The author’s highs and lows are perhaps more dramatic than the average reader’s, but their inclusion helps propel her overall message. She shows how her life path has been about confronting tragedies, not avoiding them. By refusing to associate with toxic personalities and pursuing the path that gave her the greatest sense of well-being and purpose, she says, she’s managed to avoid the pitfalls of depression and anxiety.