Leland Myrick is the Ignatz Award- and Harvey Award-nominated author and illustrator of The Sweet Collection, School Girls, Bright Elegy, and Missouri Boy, and two fantasy novels, The Ten, and Mark of the Blooded. His writing and illustrations have appeared in publications as diverse as Dark Horse Comics, GQ Japan, Vogue Russia, Flight, and First Second Books. He illustrated the graphic novel Feynman, which was a NY Times #1 bestseller. He lives in Pasadena, California.

“An exemplar of storytelling and character-driven adventure.”
– Kirkus Reviews 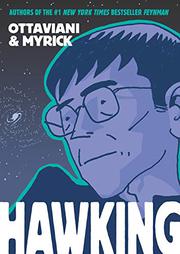 In which the sometimes-irascible but mostly genial British mathematician finds himself a superhero in a comic-book life.

“Is God bound by the laws of physics?” So wondered young Stephen Hawking (1942-2018), who soon enough would find himself bound by motor neurone disease. In the end, after years of thinking about it, he responded in the negative to an interviewer’s question, “Is there room for God in the universe you describe?” Hawking worried about all kinds of things, easily blending the worlds of mathematics and physics. Toward the end of his life, for instance, the thought occurred to him that any extraterrestrials who visited Earth would conclude that humans were a pest and needed to be exterminated. Before that, as writer Ottaviani and artist Myrick (co-authors: Feynman, 2011) note in this fluent, fun graphic biography, Hawking advanced striking theories in a scientific world whose key players sometimes seemed stuck in Newtonian physics—for example, by looking at the mathematics of white dwarf stars, the expanding universe, black holes, and so forth. You might jump into a black hole, he posited, but you would not be able to reverse the direction of the arrow of time, so that by jumping in in the past, you would wind up in the future. “I don’t think you’re going to be able to come up with enough math to prove anything about this,” says a doubtful interlocutor, to which Hawking replies, “Perhaps not. But I’d rather be right than rigorous.” Readers new to Hawking’s ideas, and particularly his enigmatic musings about the nature of time, will find this book, cartoonish as it is, to be full of insight; the science is sharp and to the point. And there are moments of good humor and beauty alike, especially in the vision of Hawking ascending, godlike, toward the event horizon, taking his place in the heavens.

Every world-changing scientist deserves such an entertaining but factually rich treatment. 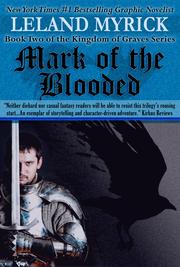 MARK OF THE BLOODED

In the second installment of his Kingdom of Graves fantasy trilogy, Myrick (The Ten, 2012, etc.) delivers high adventure, back-alley espionage and a little bit of romance.

Jorophe Horne and his companions have two purposes in life: Serve the king and preserve the peace he established. As a member of the elite fighting squad called the Ten, Jorophe previously killed demons and defeated the Dar Kharji people in epic battles of good and evil. But his work is far from over when the kingdom’s true enemy, the Blooded, arises in the north, led by the mysterious, power-hungry Prince Leoben. The warlord dispatches his army into the kingdom and meets little resistance. Few know how to defeat his legions of woelfin beasts and shidh slave warriors, and few realize Leoben’s true goals. The Blooded are aided by superhuman assassins called the Mortuus, who infiltrate the capital and deliver a crippling blow to the kingdom. Jorophe and company set out in search of a secret weapon that might bring down the invading forces, while the kingdom’s Lord Prosper commands his army of “shadows” to seek a new alliance with an ancient people. Meanwhile, Leoben’s minions terrorize the countryside, slaughtering children and enslaving women as the Kingdom of Graves teeters on the brink of defeat and complete annihilation. The novel continues where the first book left off and maintains its predecessor’s high-quality storytelling. Chapters are well-planned and -executed, providing glimpses of back story that creatively move the action forward and heighten the tension—not an easy task in an adventure tale. Myrick expands the landscape of the first book, adding an underground city ruled by a mournful monarch, a lone cottage guarded by a blind old man and snow-covered plains that frame the novel’s climactically bloody conclusion. Overall, the novel successfully presents a complex world through artfully visual scenes and multiple perspectives, with enough twists and turns to dazzle fantasy fanatics.

Highly recommended for genre buffs and newbies alike, this adventure carries readers through a land of magic, laughter and tears. 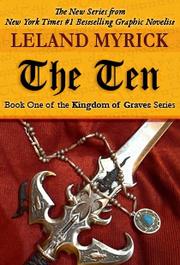 Graphic novelist turned fantasy author Myrick (Feynman, 2011, etc.) releases the first installment of a promising trilogy that trails an elite warrior as he adventures through foreign lands, weaves magic and vanquishes his enemies.

Capt. Jorophe Horne survives a three-year war only to witness his country’s annexation to the mighty Kingdom of Graves. Worse still, he is reassigned to the enemy army that destroyed his homeland. Understandably reluctant to serve his new master, Jorophe reports for duty at the behest of his now-dethroned monarch. But when evil forces conspire against the kingdom, Jorophe’s oath drives him to action: He rises to become the most powerful weapon in the King’s elite 10-man force. Armed with two ancient dark blades, he hunts down devils from the Abyss who threaten the provinces. Myrick’s epic tale features assassins, dark priests, blue demons and an Amazon warrior as it chronicles the lives of more than six core characters. All are uniquely crafted, with intentions to either destroy or save the kingdom. Brief chapters juxtapose longer prose, fueling a high-paced storyline that flies from one end of the world to the other. As the author shifts from one point of view to the next, readers slide through a rich mosaic of betrayal, greed, loyalty and honor. Of its manifold strengths, the novel is fluid and full of surprises. Readers will question the characters’ loyalties to the king as they ponder the mysterious identity of the final member of the Ten. As the book draws to a close, the final lines are likely to send shivers up readers’ spines. The author masterfully crafts vivid battle scenes and heart-pounding chases across oceans, over snow-peaked mountains and into city sewers. Neither die-hard nor casual fantasy readers will be able to resist this trilogy’s rousing start.

An exemplar of storytelling and character-driven adventure. 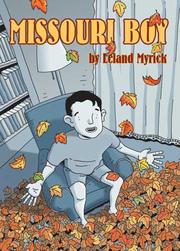 It’s been a while since we’ve seen a tale of growing up that trades neither in overwhelming nostalgia nor sheer, unmitigated dysfunction, so the publication of this illustrated memoir by Myrick (Bright Elegy, not reviewed) is especially welcome. The artist’s upbringing in a small Missouri town not far from St. Louis is chronicled in self-contained episodes identified by year, beginning in 1961 and ending in 1985. Each chapter is an evocative vignette that could almost stand on its own, and several have a Bradbury-esque glow, while darkness falls over some sections. In “My Father’s Hands,” which begins with the family dressing for court, Myrick’s oldest brother, “head bowed, hippie beard pressed against his chest,” gets a ten-year sentence for bank robbery. The most imaginative of these episodes compares his pregnant mother’s swollen belly to the distended shape of “one dying grandmother bulging with the death growing in her stomach,” then envisions the birth of the artist and his twin: “We enter the world, my brother and I . . . with the circle of life wobbling unsteadily. Attached to a grandmother we will never meet.” Most of these stories began as poems, and their elliptical lilt remains, accentuated by Myrick’s artwork (color by Hilary Sycamore), replete with haunted eyes and giant, toothy smiles. By the end, when his youthful self shakes off the past (“I feel the presence of my local gods waning”) and he heads for California, readers may feel wistful for a childhood they never experienced.

THE TEN: BOOK ONE OF THE KINGDOM OF GRAVES: Named to <i>Kirkus Reviews'</i> Best Books

MARK OF THE BLOODED: BOOK TWO OF THE KINGDOM OF GRAVES: Named to <i>Kirkus Reviews'</i> Best Books, 2013

MARK OF THE BLOODED: BOOK TWO OF THE KINGDOM OF GRAVES: Kirkus Star

THE TEN: BOOK ONE OF THE KINGDOM OF GRAVES: Kirkus Star