I live in Portland, Oregon as a lawyer, formerly, and property manager and business investor, currently. I’ve written several novels, all with the Pacific Northwest as the actual or spiritual setting, before my debut publishing of ‘The Hapless Valet’. Although I’ve had sojourns in the Far East, Micronesia and east coast U.S., Oregon is where I grew up, work, snow ride, sail, beach comb, went to school and raised my family. Portland makes an excellent setting to energize the detective genre. It’s a city of recent transplants from all over the world looking for adventure, an indie lifestyle and intrigue; kind of a Casablanca with inclement weather and microbrews.

“(The Hapless Valet's) accessibility and great cast of characters are more than enough to please mystery readers.”
– Kirkus Reviews 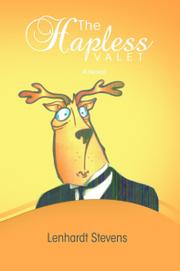 In Stevens’ debut novel, a celebrity with a history of eco-terrorism, a 1950s film noir star’s mysterious past and a jazz club owner looking to make fast money collide in rainy Portland with professional valet Draper Burns (that’s the jack-of-all-trades servant kind, not the kind that parks cars).

Dressed fancily and with a penchant for stealing wristwatches, Burns is a charismatic, untrusting hero. Given the assignment of learning more about the movie-making business by his businessman boss, Hap Wiseman, who just acquired a production company, Burns discovers colorful characters and a murder mystery. With a quick pace and enough twists to keep the reader guessing nearly until the last paragraph, the book is easily accessible and engaging. Each of the characters gets a moment to shine, and Stevens doesn’t waste time on complicated subplots or (too many) romantic rendezvous. With rotating points of view, the book shows a thorough grasp of Hollywood moviemaking and the strange types that inhabit that world. There are, however, a few minor bumps along the road. The opening of the book is more confusing than engaging, with heavily accented dialogue that works better in the smaller bits later on in the book, and this confusion is compounded by uncoordinated action. Stevens also has a habit of trying to trick the reader by describing a character in generalities (like “man”) instead of using their names, even if the reader and the narrating character already know the mystery character’s name. While this is done to deliberately mislead the reader (and it works well once or twice), it’s more distracting than clever and happens frequently enough to get tiresome. Although there’s nothing especially new or unique about the book, its accessibility and great cast of characters are more than enough to please mystery readers.