Les Américains is the nom de plume of Eileen McKenna and Marty Neumeier, an American couple who divide their time between California and France. Eileen is the kind of person who can predict an entire plot from the first line of a novel or the first scene in a movie. Marty is a design consultant who has written six books on innovation and branding. Their daughter Sara, who appears in BEGINNING FRENCH and contributes the recipes, is a New York food stylist who began her career at Martha Stewart Living. Les trois Amèricains meet every summer in France—to cook, write stories, and share photos and travel tips with followers at www.beginningfrench.com.

“A delightfully evocative farmhouse tale; as satisfying as a summer evening on a French terrace, with a cool glass of rosé in hand.”
– Kirkus Reviews 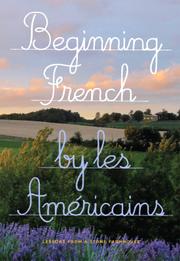 A California couple realize their ambition of owning a house in rural France in this debut memoir by Les Américains.

Other than a handful of names being changed in the interest of privacy, this work tells the true story of an American husband and wife, Marty and Eileen, studying French and learning how to live in France. The couple co-authored the volume, with Marty “driving” and Eileen “navigating.” The stark differences between American and French cultures become clear from the outset. When they visited Paris, a concierge refused to converse with them because they “did not say bonjour,” and a raging chef burst from the kitchen wielding a knife when the party chose not to order entrees. Despite their early showcasing of French pomposity, the authors remained adamant that they did not simply want to speak the language, they wanted to “be French.” To achieve this goal, they purchased an old stone farmhouse near Bergerac in Aquitaine, southwestern France (“The large kitchen had a massive white range and a clay tile floor…and the master bedroom looked out towards the view through two walls of French doors. There was a large old tree in the courtyard”). The transition was not without calamity, and when the boiler malfunctioned, flooding the house with water and ruining the majority of their possessions, the two grasped that striving for a new life abroad can come with a price. Living in France offers many rewards, and the couple’s triumphs in learning the language and assimilating into a new culture are a joy to discover. The gorgeous landscapes provide an ever present backdrop, captured in bursts of warm, descriptive prose: “As we drove, the landscape changed from rolling hills and vineyards to forests and rocky outcrops. Golden cliffs curved out over the road, undercut by the carving action of long-ago rivers.” The duo displays a gastronomic fascination with French cuisine, and the text delivers mouthwatering recipes, such as an indulgent goat cheese soufflé and a scrumptious lemon cheesecake. Thoughtfully written, understated, and without pretension, this book should appeal to Francophiles and epicureans alike. It also pays testament to the single-mindedness, bravery, and unfaltering desire of two particularly likable “Américains” who set out to fulfill a dream.

A delightfully evocative farmhouse tale; as satisfying as a summer evening on a French terrace with a cool glass of rosé in hand.

Beginning French: LESSONS FROM A STONE FARMHOUSE: Kirkus Book of the Month (November), 2016

Beginning French: LESSONS FROM A STONE FARMHOUSE: Kirkus Indie Book of the Year, 2016