LINDA DAVIS Linda Grimes-Davis enjoys her adventures as a retiree in St. Petersburg, Florida. There she resides with her husband of 20 years, Tony. Linda spent over 44 years in the hospitality industry, during which time she lived on 2 continents, owned 5 restaurants, raised 2 daughters, and created stories to share with her grandson, Oliver. Now, she invites children into the wonderful stories she wrote, inspired by her family, adventures, and travels. She has been featured on CBS, Great Day Tampa Bay, and Radio St. Pete. She’s also donated her time to reading for children in local schools as well as the Tampa Children’s Museum.

“In her debut, author Davis sometimes goes to unexpectedly dark places, although each story ends happily. But the stories do a nice job of capturing the characters' individual personalities. A collection that may sometimes be tough for the tenderhearted, featuring a distinctive animal cast.”
– Kirkus Reviews 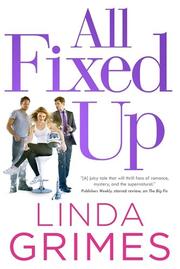 An addition to the sexy, fun urban fantasy series (The Big Fix, 2015, etc.) featuring Ciel Halligan, “aura adaptor”—which means that, thanks to a genetic mutation, she can assume the appearance and physical characteristics of another person in a sort of 21st-century version of elvish “glamour.”

Ciel’s latest gig involves covering for the temporary indisposition of astronaut Dr. Philippa Carson, who intends to be the first woman to conceive—via IVF—in space. But then the mission’s official photographer, Alec Loughlin, accuses Ciel of being an impostor. But how does he know? Can he see through her aura? Worse, Ciel's elderly Aunt Helen—also an aura adaptor; the talent runs in the family—turns up murdered. When Loughlin puts in a hostile appearance at the funeral, Ciel knows something’s deeply amiss. Other family members are murdered using the same gruesome method, so Ciel turns to her hot-hot-hot boyfriend, adoptive cousin, adaptor, and mysterious operative, Billy Doyle. Here, Ciel’s forced to make a confession: she’s pregnant. And she isn’t sure who the father is. Not at all the paternal type, Billy blanches and promptly disappears, compelling Ciel to turn to CIA agent and far-from-ex-crush Mark Fielding—the alternative candidate for fatherhood. Loyal, compassionate Mark insists he’ll marry her even if the baby isn’t his. He’ll also investigate the possibly homicidal Loughlin and his perplexing associates, aura adaptors being a significant asset to the CIA. Can Ciel stay alive long enough to decide between Billy and Mark? Grimes keeps the pot bubbling with humor, suspense, steamy sex, riddles, danger…oh, and more hot sex.

Sure to please series regulars and fans of urban fantasy/mystery/romance. 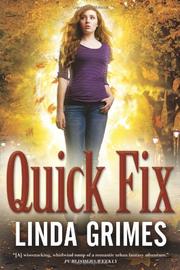 Second (In a Fix, 2012) in the urban fantasy series starring Ciel Halligan, “aura adaptor,” meaning that she can take on the physical characteristics of another person. Even more useful, auras can be remembered and swapped with other adaptors.

This time out, Ciel visits the National Zoo with hot-hot-hot adoptive cousin (and adaptor) Billy and his 10-year-old sister, Molly. Precocious Molly may be an adaptor herself. But when she touches a baby orangutan, she turns into an ape—and can’t change back! Smuggling Molly off the premises while pursued by overzealous zoo officials proves a challenge for Billy and Ciel, as does concealing orang-Molly’s condition from her relatives. Help may be at hand in the form of James, Molly’s nonadaptor, science-whiz brother, who has a theory that the adaptor ability may be genetic and susceptible to switching on and off. But then CIA operative Laura, whom Ciel met in the previous adventure, turns up shot under circumstances that make it seem as if Billy shot her. So Billy’s arrested for attempted murder, although he doesn’t stay in jail long—it’s simple for another adaptor to exchange places with him. And soon Mark, the CIA spook Ciel still has a crush on from high school, shows up. Billy, who knows more than he’s saying, doesn’t trust Mark’s boss—clearly there’s far more going on than anybody will take the time to explain to Ciel. Will Ciel finally get herself into bed—and with Billy or Mark? And then James turns invisible, Molly's still an ape, Ciel’s overabundant brothers continue to interfere; everybody, it seems, wants to tell Ciel, who’s practically gushing hormones, what to do.

Not quite as much fun as last time, but it’s sexy and amusing and sure to please Grimes fans. 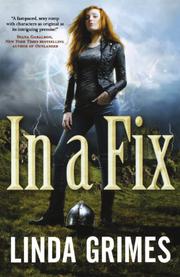 First entry in an urban fantasy series, from newcomer Grimes.

Ciel Halligan is an “aura adaptor,” meaning she can take on the exact appearance and demeanor of another person. Professionally, this ability enables her, with a little research, to undetectably replace her clients in situations where the clients find it inconvenient to be themselves. The fat paychecks don’t come amiss either. The only blot on the horizon is the smothering, overprotective attitude of cousin Billy (being adopted, he’s not actually related) and CIA operative Mark; both share her talent, and neither thinks anything of snooping through her files. Ciel also has a huge and longstanding crush on Mark, which makes for amatory complications. Ciel’s current assignment is a plum: masquerading as Mina, a stunningly attractive society girl, so Mina can take care of other business while Trey, her gorgeous hunk of an about-to-be fiance, pops the question in a luxury bungalow on a tropical resort island. Fun stuff, not to mention the prospect of hopping into the sack with Trey—until Trey suddenly vanishes and the bungalow explodes into flinders. Whodunit, and why? Well, a bunch of modern-day Vikings who, it turns out, have designs other than just adopting manly postures and dressing their womenfolk in early medieval garb. Ciel, despite the strictures imposed by Billy and Mark, refuses to be sidelined and gets on with her own investigation. Despite Mark’s continuing allure, Ciel—in between getting half-drowned and shot at—notices that Billy, beneath all his teasing and banter, is pretty hot, too. But can she convince them that she is, in fact, competent to run her own life?

Bright, fizzy, sexy and amusing—the perfect antidote to an attack of post-summer blues.