Driving in Reverse - The Life I Almost Missed

"In all, a very bizarre, chin-dropping, f#%@ked up, highly entertaining book!!"

Lindsay Wincherauk is a full-time writer + humourist + observer of the human condition. His meta-memoir Driving in Reverse - The Life I Almost Missed is a uniquely compelling whiplash narrative on overcoming family deception and then piecing a shattered core back together in a positive manner. In the story he faces down the BIG C, has chance meetings with the Dali Lama, Fox Mulder + an inferno of wild characters as he blasts through Europe to escape his not-so-real realities.

The book is gonzo-style, fly-on-the-wall reading, written in a one-of-a-kind way. The story is part script and part memoir. The reviews have been glowing.

"It's a modern tragedy comedy!"

"...the writing format and structure used by Lindsay is in itself quite the art form...it actually became just as enthralling as the actual account of his life. He doesn't mess around, there's no complicated, stuffy use of the English language here. Lindsay, goes straight for the jugular with a writing style that is so fragmented, splintered, broken, and stripped to the proverbial bone (much like his own life)."

When Lindsay is not writing, he works full-time as a human resources guru for a construction labour agency. He's blind in one eye. He's a record holding quarterback, amazing (see blind in one eye). He witnessed a hate crime, becoming a key witness; resulting in the first Hate Crime conviction in Canadian legal history.

His follow-up book: PLAY is in the revision phase and should be ready for release soon!

He is open to representation: Publishing/Agent/Film + Television! 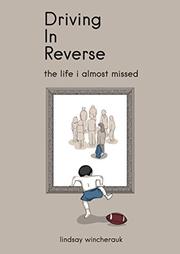 In this memoir, Wincherauk (Seed’s Sketchy Relationship Theories, 2004) recalls a tumultuous past life and a personal search to discover what truly matters.

Just over 100 pages into this disconcerting remembrance, the Canadian author declares, “Four fucking months—only four months had passed. BREAKUP—SUICIDE—CANCER—ALIENATION—INFIDELITY—DEATH—CANCER—DEATH—DEATH—AND—FUCKING DEATH; had entered my life.” Sadly, for the author, nicknamed “Seed” by his friends, this pattern of pain made up the first portion of his life. The former bartender from Vancouver says his first childhood memory was discovering his brothers “chanting together in a continuous loop”: “Lindsay, we are going to get you. Lindsay, you are not one of us.” Two of his brothers, he says, tried to convince him to “stick [his] dinner knife in a wall socket.” Wincherauk's difficult relationship with his family led him to escape into sports, including football. Yet despite small victories, fate always seemed to deal him a bad hand. He lost multiple friends and family members to cancer, which he personifies as “THE BIG C,” a sadistic killer. He led a life as a drifter, punctuated by drunken days and nights in dive bars, drug experimentation, failed relationships, and failed business ventures, but it also included travel to numerous far-flung destinations such as France and Jamaica, and an encounter with the Dalai Lama. The book is part memoir and part self-help guide for those who've had similar experiences, and it often takes on an appropriate tone of mocking self-awareness: “I vomited in my mouth a little bit when I typed the last line.” Stylistically, however, the memoir is a chaotic and choppy read, in no small part due to Wincherauk’s idiosyncratic tendency toward one-sentence paragraphs. This, coupled with a coarse tone throughout (“Having to defend my emotions was fucking sucking”), may deter many readers. That said, it’s difficult not to admire the author’s ability to face the darkest aspects of his existence head-on and remain ebullient. Black-and-white and color photos are included.

There are far too many brilliant authors to limit oneself to just one.

A Man Called Ove (Actually, I don't have a favorite. I loved Ove. He became a great friend).

Sharing stories in hopes to make the world a slightly brighter place!

In the critically-acclaimed "Driving in Reverse - The Life I Almost Missed," Wincherauk relived his past when the realities of becoming a secret unwanted child are placed on his doorstep during a time of heartache and mistfortune. In a sense, the truth set him free; destiny took him down a path where survival, destruction and the search for identity became strange bed-fellows, in a story told in real-time. The past was being unmasked employing stream-of-consciousness storytelling, making every reader a character in the plot. "PLAY" picks up where "Driving in Reverse" left off—Lindsay's again-living mother abandons him for a second time—and he fatefully meets his real father, eighteen-years after he had watched his father die. Unlike, "Driving in Reverse" in which the past was catching up with the present, in "PLAY," the present is prevalent with the occasioal glimpse backward in an attempt to find meaning in what has transpired. "PLAY," continues the mysteries hidden in family decetption, opening a window into a surreal Kafkaesque past, with reality becoming a tragedy—necessary to overcome. Colourful and tragic new characters are introduced and issues of sexuality are examined. In the chapter: "William Richard Dowrey—Ritchie Rich," Wincherauk explores and examines the consequences of senseless violence in an urban landscape. It ties numerous lives together after Ritchie, a father of two, becomes a victim of a gay-bashing in Vancouver's West End. As "PLAY" winds down, after blasting through: GO - NEXT GAME - NEW PLANE - TWIST - INTEGRITY + FREE PLAY—evolving is amped up to a lightening pace; making sense of the nonsensical is dropped onto life's docket, highlighting the necessity of embracing life, finding balance, and accepting who we're becoming. As we continue living in the moment, we accelerate forth into...will Lindsay ever connect with his real mother?

Seed's Sketchy Relationship Theories - A Guide to The Perils of Dating