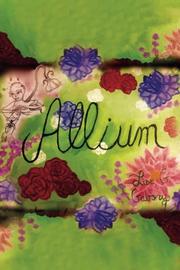 A young plant learns about the natural world in this debut eco-adventure for middle-grade readers.

As soon as Allium, a garlic plant, has sprouted, she’s curious about the world around her: what are those drops falling from the sky? What is that red-and-black-speckled bug coming in for a landing? The insect, it turns out, is a ladybug named Bet who answers all of Allium’s other questions and teaches her all about the natural world. Things are going well until Allium and the other inhabitants of the garden are threatened by the Septoria sisters—a couple of very serious plant diseases that could wipe everything out, as they’ve done many times before. To combat this possibility, Allium and the rest of her friends must come up with a plan in time, or they may be doomed to become tomorrow’s compost for crop rotation. Most works that use anthropomorphic animals and plants for the sake of teaching a lesson about the natural world are lighthearted, frothy works. Lisa G. Gabory’s debut, though, isn’t quite as breezy as others—and this is a good thing. Instead, the author sets the scene for a bit of a thriller, and the tension increases as Allium and her garden get closer to their potential doom. Of course, this drama also relates plenty of important information about natural processes, such as photosynthesis or how sap-sucking insects produce honeydew (which ants love). These scientific breaks keep the suspense at bay while also educating young readers. Also on the docket are lessons in friendship, bravery, and perseverance, which anyone could stand to brush up on. Both adults and kids will enjoy taking a trip through Allium’s world, and that’s a testament to the quality of the author’s prose and her penchant for big ideas. That said, the illustrations by the author and Lisa M. Gabory are unnecessary, and frankly, a little spooky. All in all, though, this work is certainly a welcome addition to the canon of talking-plant stories.

A thrilling and educational tale for young and old alike.