Liz S. Andrews is a native of East Tennessee and was blessed to grow up near the Great Smoky Mountains, the playground of her childhood and adolescence. She is also an amateur mixologist and whiskey lover. The cocktails Harley Henrickson creates in the book are her and her husband's creations. When she's not writing, she enjoys reading, cooking, and hiking with her dog, Scout, a golden retriever/labrador mix. She currently resides in Western Pennsylvania near Pittsburgh. The character of Tina Rizchek is a wink to her love for the 'Burgh.

“Andrews--like her heroine--mixes up a tasty cocktail out of appealing ingredients....The complex plot is intelligently managed and full of surprises....Characters, too, are multilayered. Keeps readers guessing--with humor and romance balancing the whodunit.”
– Kirkus Reviews 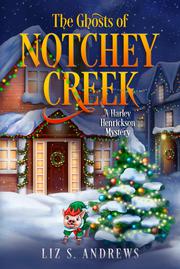 THE GHOSTS OF NOTCHEY CREEK

A sequel offers a holiday homicide case for a Southern whiskey distiller and sleuth.

Notchey Creek, Tennessee, is in the throes of the holiday season, and Harley Henrickson, whiskey maker and owner of the Smoky Mountain Spirits liquor store, is plenty busy. The festivities this year include a New Year’s Eve Ball at Briarcliffe, the local mansion on the grounds of the Great Smoky Mountains National Park. The mansion has a new resident: Beau Arson, rock star and scion of the Sutcliffe lumber family. Unfortunately, Beau has been experiencing some paranormal activity in the house, which ghost hunter Justin Wheeler is happy to tell him is the result of a woman who killed herself in the property’s woods on Christmas Day in the late 1800s. The strange thing is that Harley and her pet pig, Matilda, have just discovered the body of a woman in those same woods. But when Harley stepped away to call the police, the body disappeared. After a second body—this one someone Harley knows well—is found, she realizes that she must once again set aside her whiskey barrels and put on her investigator’s hat before this mayhem ruins Notchey Creek’s celebrated Small Town Christmas Festival. Andrews (The Mist Rises Over Notchey Creek, 2018) spins her holiday yarn with a pleasing mix of cheer and dread: “Beneath the hand lay a mound of body, like a snowman fallen on its side, and Harley brushed the snow from the torso, revealing a woman’s black dress. She worked her way up to the head region, where threads of dark hair swirled in a frozen pattern on the snow.” The novel has a classic feel, and of all the day jobs that an amateur detective might have, whiskey distiller is certainly a fun one (and fitting with the Smoky Mountains landscape). The book is a perfect choice for reading by the fire after the Christmas guests have gone home, though it may keep readers up late into the night.

A deftly constructed and thoroughly enjoyable small-town murder mystery with a Christmas twist. 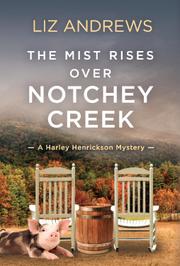 THE MIST RISES OVER NOTCHEY CREEK

A young Tennessee woman investigates strange events concerning a missing drifter, a rock star, and a murdered professor in this debut mystery novel.

In small-town Notchey Creek, Tennessee, everyone knows everyone else. Harley Henrickson can’t overcome her lifelong reputation as a nerdy frump and doesn’t try. Instead, she concentrates on the family whiskey distillery and store, Smoky Mountain Spirits, though she’s often distracted by the shenanigans of her pet pig, Matilda, and her colorful great-aunt, Wilma True, secretary for the distillery and a surrogate parent to Harley. Once, Harley was college-bound with a Harvard scholarship and wanted to be a writer. But when her grandfather, who raised her, became ill, she stayed in Notchey Creek to care for him; when he died, she inherited the distillery and shelved university plans. With the autumn festival about to start, the town’s business leaders want no problems—but first, a stranger is discovered drunk in a ditch (and wanders away again). Then rock star Beau Arson, with his considerable entourage, takes over an entire resort, and later Dr. Patrick Middleton, the wealthy and respected president of the Historical Society, is found dead, perhaps murdered. The town sheriff, ex–NFL player Jed Turner, is distracted by girlfriend problems so Harley investigates—a search that will take her back into her own childhood and several long-kept, explosive secrets. In her novel, Andrews—like her heroine—mixes up a tasty cocktail out of appealing ingredients. Though the tone can be uneven, veering uncomfortably between corn pone and gothic, the twisty, complex plot is intelligently managed and full of surprises. Characters, too, are multilayered; Beau is more than a bad-boy rocker, for example. The Appalachian setting adds flavor, as with local Scottish-Irish settlers’ legends about Samhain, when “spirits would come down from the Smoky Mountains at dusk, and carried by the evening mist, they would haunt the Tennessee Valley until dawn.” Many townspeople do seem haunted, by spirits, the past, or memories. Harley, for example, remembers a boy who was kind to her when she was a grieving child—a boy whom, the book hints, she might reconnect with.

The Ghosts of Notchey Creek

It's the holiday season in Notchey Creek, Tennessee, and whiskey distiller Harley Henrickson senses something eerie in the air ... It's almost Christmas in Notchey Creek, and whiskey distiller Harley Henrickson is busy mixing yuletide cocktails at her store, Smoky Mountain Spirits. There is snow on the ground, holiday music in the air, and wreathes on every lamppost. Everything seems perfect for the town’s biggest event of the year, the Small Town Christmas Festival. Even Harley’s pet pig, Matilda, is feeling festive, wearing the Elf on the Shelf costume Aunt Wilma bought for her. But not all is merry and bright in this little mountain town. Harley senses something eerie in the air, and it all points to Notchey Creek's oldest and most beautiful home—Briarcliffe. No sooner has rock star Beau Arson settled into his ancestral mansion of Briarcliffe, than a self-righteous ghost hunter arrives in town, telling macabre tales about Beau’s new home. According to legend, a young woman by the name of Margaret Reed hung herself in the woods behind Briarcliffe on Christmas Day, over a century ago. To make matters worse, Beau has been experiencing ghostly encounters at night, seeking to drive him from his family’s home. When Harley finds the body of a mysterious woman in the woods near Briarcliffe, and then a wealthy antiques dealer is murdered, she decides to investigate. Can Harley intervene before a century of lies, greed, and passion destroy Beau Arson’s new life—the past he’s just only come to know?
Published: Nov. 19, 2019