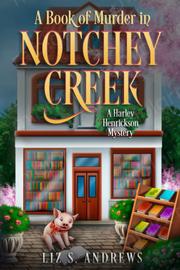 A BOOK OF MURDER IN NOTCHEY CREEK

Andrews’ sleuthing whiskey-maker investigates some bookish murders in this fourth mystery novel in a series.

Spring has come to Notchey Creek, Tennessee, and local distiller Harley Henrickson is taking in the seasonal splendor of the town’s Antiques and Blooms Festival. The festival’s great find turns out to be a signed first edition of the classic Charlotte Brontë novel Jane Eyre; one of Notchey Creek’s resident book appraisers values its worth at “hundreds of thousands” of dollars. The owner, Suzanne Clare, is wealthy, attractive, and new in town—and from what Harley hears from vague local gossip, she has a reputation for being “trouble.” Before long, a woman who was watching the appraisal is found stabbed to death behind a dumpster. Then Suzanne is found murdered, and the copy of Jane Eyre that was in her possession is missing. Police suspect it’s a case of burglary got awry, but Harley isn’t so sure. Harley’s good friend, a rich local rock star known as Beau Arson, is revealed to have a troubled past with the murder victim and becomes a prime suspect in her death. Harley must closely read the clues to solve this literary mystery. Andrews’ novel is a loving ode to books and the people who love them, and her prose has the warm feel of a well-worn hardback, as when she lushly describes the library at one of the town’s gothic mansions: “Dark oak paneling, bifurcated by rows of antique books, formed a panoply of vintage color, which climbed from the black-and-white ornamental tile floor to the high plaster ceiling.” Indeed, the novel is steeped in atmosphere, creating in Notchey Creek a kind of Appalachian version of Agatha Christie’s St. Mary Mead, complete with a 300-pound pet pig, and readers will be happy to wander through it. Some may find the vast cast to be a bit too crowded, but once there are murders to solve, they’ll find the novel to be a brisk ride. 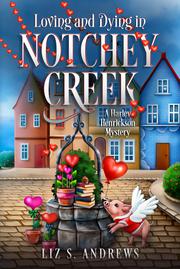 LOVING AND DYING IN NOTCHEY CREEK

A Tennessee whiskey distiller puts her sleuth hat on again in this third installment of a mystery series.

Notchey Creek has seen a lot of drama for a little Appalachian town, and 26-year-old whiskey distiller Harley Henrickson has been in the thick of it, investigating murders and solving mysteries while inventing cocktails. Now, with Valentine’s Day celebrations afoot, several kinds of trouble are stirring up. Harley discovers a burned-out car with a body inside; the sheriff thinks it’s an accidental death, but she’s not so sure. Other conflicts include blackmail, romantic rivalries, and a messy divorce between Ryan and Jessica Westlake, two of the town’s wealthiest residents. Then there’s Ryan’s rumored affair with Bethany Carmichael, 26, who writes devastating reviews of local establishments for the Notchey Creek Telephone, a newspaper owned by Ryan. Jane Merriman blames her husband’s fatal stroke on Bethany’s scathing column, which led to their restaurant’s failure. The latest victims of Bethany’s vitriol are Harley’s best friend, Tina Rizchek, also 26, and her bakery/cafe, Tina’s Treats. When Bethany dies from eating a poisoned cupcake, Tina is the chief suspect—but given the reviewer’s reputation, not the only one. Although it’s a tangled web, Harley is the woman to unravel it. In her latest series entry, Andrews again does a fine job of keeping the mystery’s solution in suspense until the end while offering a charmingly folksy setting and eccentric characters. Harley’s great-uncle and his friend, for example, hope to attract bidders at a bachelor auction by highlighting such skills as “Can pee the alphabet in snow.” The more colorful aspects of Harley’s life (like her fashionista pet pig) are given depth by her intelligent, determined sleuthing as well as romantic yearnings complicated by self-doubts from a painful childhood.

Another twisty, entertaining entry in this cozy series featuring an appealing investigator.