Lloyd Tosoff is a Canadian singer, songwriter, painter and novelist. His songs have been recognized by some of Nashville's greats and his novels acclaimed by Kirkus Reviews. Although today Lloyd's focus is on his novels, he remains as talented renaissance man tapped into a well-spring of creativity.

A prolific natural born storyteller with a descriptive writing style, Tosoff's novels create energy and excitement that keep readers on the edge of their seats through action driven plots with surprising twists and turns. Clever dialogue and well crafted narrative draw the reader into story-lines with gripping conflict from the opening first sentence to a satisfying ending. Tosoff's work is well researched and his character development colorful and believable.

Lloyd transitioned from his role as an accomplished chief executive in an award winning company that he was instrumental in building to pursuing his love of the written word in 2009. His first novel “The Consultant” written under a pen name reached #2 in Kindle Crime Fiction in the UK.

He is working on a new writing project set in ancient England. Earth is an antediluvian paradise until dark forces within the Underworld threaten to grievously alter the course of humankind. To counteract the evil presence, a Pleiadean visitor from the far reaches of the Upperworld lands in the dark forests of Norseland and impregnates a young sibyl to begin a star seeded bloodline that eventually unfolds on the Salisbury Plain of Southern England. Children of Pleiades follows the timeless human struggle enfolded by cosmic forces of good and evil that have existed since the beginning of time.

As a student of the Creative Writing program at the University of Toronto Lloyd completed the study of advanced screenwriting in 2013. His formal study has been an invaluable tool in creating the gripping narrative and interesting character development that consistently results in top Kirkus Reviews and readers who give 5 star reviews to his work.

“Tosoff’s research is admirably meticulous—his mastery of the geopolitical currents of the day, including the details of European geography, is indisputable. He captures the impossible predicament of so many Germans at the time—loyal to their native land but also left at the mercy of an insanely criminal regime.”
– Kirkus Reviews 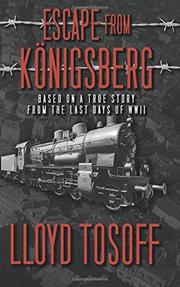 At the end of World War II, a German teenager escapes the Red Army and seeks to reunite his family in this historical novel.

In the final year of World War II, 17-year-old Walter Heinrich’s life in Konigsberg is increasingly imperiled. Germany is certain to lose the war, and the Red Army is rapidly advancing from the east, leaving a trail of destruction behind its relentless march. Adolf, Walter’s father, who was conscripted into the German army and then disappeared, is now presumed dead. Then, Carl Forsythe, a British pilot, is downed nearby and seeks refuge in the Heinrich household, which Walter’s mother, Lena, eventually provides. Carl and Lena develop romantic feelings for each other—a connection born out of fear and despair beautifully depicted by Tosoff (Point of Return, 2018, etc.). Walter discovers their relationship and is enraged by her act of disloyalty, especially when he learns Adolf is actually alive and being held in a French work camp for prisoners of war. Carl finally sets out on his own, but not before his presence is reported by a meddling neighbor; when a German soldier comes to inspect the Heinrich home, Lena is brutally raped and murdered by him. Walter flees with his two sisters—6-year-old Mila and 10-year-old Brigitte—to Berlin, where his paternal aunt lives, but the three of them are intercepted by German authorities and sent to an orphanage. The author memorably portrays Walter’s relentlessness—he escapes the orphanage and sets off for France in order to find his father and, despite finding love in a small French town near Luxembourg, refuses to surrender his quest.  Tosoff’s research is admirably meticulous—his mastery of the geopolitical currents of the day, including the details of European geography, is indisputable. He captures the impossible predicament of so many Germans at the time—loyal to their native land but also left at the mercy of an insanely criminal regime. Walter experiences the moral degradation of his own people, made mean by their abuse, but he also understands their loss of esteem before the world: “Everywhere Walter went there were stories about beatings and even random murders perpetrated against innocent people just because of their Germanic ancestry. He wanted to get out from under the stigma foisted upon him and his countrymen because of Hitler’s evil deeds.” Tosoff’s prose is lucid and crisp—the entire novel is narrated in the third-person—but lacks any poetical quality. It reads like a combination of personal anecdotes and professional history, as if the author is unsure of which to assume and unable to seamlessly combine the two. The power of the story is its quiet lack of sentimentality—Tosoff unflinchingly describes the darkest depravities without either bowdlerizing the grim details or laboriously trying to shock readers. The moral record, so to speak, is read out loud without maudlin embellishment, and readers are trusted to understand its meaning or devise their own. One could argue that descriptive restraint is itself a species of poetical accomplishment.

A realistic rendering of a horrific period in German history. 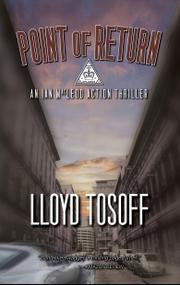 A Scottish accountant becomes a target for gangsters and Scotland Yard in Tosoff’s (Escape from Konigsberg, 2016, etc.) thriller-series launch.

After nearly a decade in a loveless marriage, Ian MacLeod returns to his hometown of Glasgow, Scotland, from Brighton, England. Things look up when he meets fetching criminal profiler Kyla Fraser and runs into former schoolmate Jordie Dunsmuir, who offers him a job. However, the gig at Jordie’s accounting firm, RIA, may be too good to be true. It consists of “night audits” in which Ian secretly looks into other accounting firms to uncover suspicious activity. His first job is digging into London company SXZ Enterprises, where he unearths financial fraud and, surprisingly, a much more unsavory crime. Then someone at SXZ, who had a pre-existing tie to Ian, turns up murdered, pointing police toward the accountant as a suspect. Ian links the murder to an earlier death involving the Glasgow mob and later pilfers a substantial amount of money from another mob-affiliated company. With authorities and gangsters on his tail, Ian needs help from anywhere he can find it, including from Kyla at Scotland Yard. But their romantic involvement could put them both in danger. Tosoff’s novel is a worthy introduction to its protagonist, whose descent into events beyond his control is plausible as well as riveting. His coupling with Kyla happens too quickly, but it does launch an unorthodox relationship. Kyla, for example, learns about Ian’s history via interviews with his ex-wife, Judith Reid, and former roommate Danny McGinnis, the latter of whom may be the reason why Ian high-tailed it out of Glasgow years ago. Scenes with the villains provide more depth; inevitable mistrust among them ultimately results in more death. The story maintains its swift momentum as Ian goes on the run, but there’s room for humor, too; for example, to find out how to unlock a desk during a night audit, Ian does something smart and a bit droll—he uses Google.

A thriller with a down-to-earth protagonist whose misadventures are invigorating.

Pillars of The Earth

ESCAPE FROM KONIGSBERG: Escape from Konigsberg was featured in Kirkus Reviews July Edition, 2018

A flight across the frigid waters of the North Atlantic ends in a crash landing on the shores of Iceland where Ian MacLeod begins yet another chapter in his troubles with the Scottish Mob. The heir to murdered Glasgow mobster Douglas McMurphy's criminal empire seeks revenge after seven years in pursuit of the man he holds responsible for his father's death. Joseph McMurphy is a sex and cocaine addicted sociopath who has rebranded his father's crime syndicate to bolster his legitimate image as a CEO. A gangland sanction against MacLeod's life ultimately ends in the rugged terrain of Scotland's Cairngorm Highlands where MacLeod faces his greatest ordeal.
Published: Oct. 12, 2018
ISBN: ISBN-13: 978-1727210774

Being in possession of mob money catches up with MacLeod and he is extradited back to the UK after he and Kyla help Natasha, a young victim of the sex trade, kick her heroin addiction at a healing center on the Cayman Islands that MacLeod funded with pilfered mob money. Kyla finds out that Scotland Yard and the Home Office are rife with corruption at the highest levels and calls upon former spy and lawyer Nigel Cambridge to help free MacLeod by cutting a deal that takes the trio on a jaunt into the Scottish Highlands. Political intrigue and the sexual secrets of the UK’s most powerful men are interwoven into a complex plot driven by a conspiracy contrived to set MacLeod up for revenge by mobsters Ascot and McMurphy. An exposé that delves into the sex trade on the seedy streets of East London, and offers a glimpse into the life of exotic call girl Justine Prothumo, reverberates all the way up to the Home Office
Published: June 6, 2018
ISBN: 13: 978-1720602095