Lois Chapin is an award-winning poet who has been published in many literary anthologies and is a member of the Los Angeles Poets and Writers Collective. She is a writer and psychotherapist in California. She addresses the most challenging aspects of the human condition and as a recovering Seventh-Day Adventist, writes about cult abuse and religious fanaticism. Between analyzing and commenting on the dark intangible emotions of life, she spends her down time racing outrigger canoes on the Pacific Ocean. During long hours of writing and editing, her chef sweetheart plies her with nutritious creations to make sure she doesn’t starve.

“Chapin’s masterful poetry collection traces the arc of a lifetime—growing up in a violent household, teenage rebellion, parenthood, and reuniting with an estranged mother...Dealing with the darkest of issues, including domestic violence, addiction, and rape, this collection can be emotionally challenging. Chapin is nonetheless an alarmingly skilled poet whose devastatingly powerful debut demands a cover-to-cover read in one sitting...Acutely observant writing; unsettling and life-affirming in equal measure.”
– Kirkus Reviews 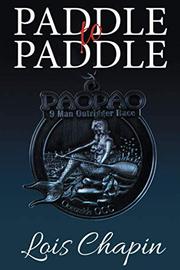 Chapin’s masterful poetry collection traces the arc of a lifetime—growing up in a violent household, teenage rebellion, parenthood, and reuniting with an estranged mother.

Chapin’s debut carries a disclaimer stating that it’s a work of fiction. Still, this poetic meditation on lost innocence feels chillingly real. The opening poem, entitled “Proverbs 29:15,” examines Mary’s parenting of Jesus through contemporary eyes: “Seems like Jesus’ mom / was cool. / Encouraged him to argue, / and disagree, / let him hang out / with older friends.” The poem has a spike in its tail, ending: “If only Mary / had written / Child Guidance, / and not Ellen, / the cult leader.” The poet takes a jab at Seventh-day Adventist Ellen White, whose instructional book on child care placed an emphasis on purity, among other virtues. The proverb referred to in the poem’s title reads: “A rod and a reprimand impart wisdom, but a child left undisciplined disgraces its mother.” Here, Chapin introduces issues central to the collection, written from the perspective of Lois, a daughter whose unstable Adventist mother brutally wields the rod of punishment. Writing in the first person, Chapin captures the innocence of childhood with nostalgic beauty, such as in the poem “Fishhook”: “we dig holes / to China / and set up Matchbox car / cities in the dirt.” This innocence is soon punctured, and disturbingly so, in the poem “Black and White and Read All Over”: “The escalating voices / and inevitable pleas for mercy / followed by / the sounds of a scrawny boy being beaten / by an obese woman / happened just about / every night.” Chapin’s matter-of-fact language makes the revelation even more troubling, particularly this chilling line: “Last night / she made him bleed / all over the paper, or maybe / she incited our father to participate.” The collection charts a young girl’s coming-of-age, and Chapin’s writing grows markedly more assertive and muscular to reflect this: “Her sharp nails were inches / from my face, / but now I was taller than her / and my grip was more / than physical.” Subsequent poems describe how Lois escapes to become both “an excommunicated fundamentalist” and a parent herself. She describes her own experience of parenthood, with its grave challenges but also moments of enlightenment, such as when climbing with her son: “His life was once again / in my hands / with the pleated blue cord / attached to each of our / bellies.” Chapin’s mode of expression may be laconic, but she possesses the power to touch the reader, often at the most unexpected of moments. The collection twists emotionally once again when Lois accompanies her long-estranged, now-ailing mother to the hospital for treatment. Dealing with the darkest of issues, including domestic violence, addiction, and rape, this collection can be emotionally challenging. Chapin is nonetheless an alarmingly skilled poet whose devastatingly powerful debut demands a cover-to-cover read in one sitting.

Helping those who are trapped find a way out