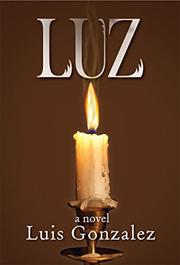 Gonzalez’s debut novel, the first in a planned series, follows an idealistic young Cuban woman whose fate may change the course of human history.

Nineteen-year-old Clara thinks she’s witnessing a miracle. It is 1994 in Cuba, and after four years of food shortages, blackouts and rampant unemployment, the people are rebelling against Fidel Castro. Cubans are fleeing the island in improvised boats, and Castro’s blue-uniformed police seem powerless to stop them. For Clara, her husband, Rigo, and their friends, this historic moment represents a shot at freedom and intellectual fulfillment in the United States. But when an otherworldly messenger visits Clara on the eve of their exodus, she decides to sacrifice the life she has always dreamed of in order to serve a much higher calling. Gonzalez is a strong, sometimes-idiosyncratic prose stylist particularly adept at capturing the clash of idealism and futility that marks this period of Cuba’s history. However, his habit of returning time and again to the same details—Clara’s anxious state of mind, her ruminations on the landscape, the omnipresent police—often brings the story to a standstill when the stakes are at their highest. The tension is further dissipated by a sudden shift to the heavens, where a comic disagreement between an imperious Creator and a rebellious Son of Man underscores the political strife on Earth but does little else to advance the novel’s plot. These flaws work against Gonzalez’s considerable storytelling prowess, which he most fully realizes in a chapter devoted to the back stories of Rigo and Clara’s father. Here, flashbacks allow the story to move along while capturing the heartbreak of intellectual yearning snuffed out by an oppressive bureaucratic regime. Unfortunately, the rest of Clara’s lengthy narrative struggles to get anywhere fast. Readers who stick it out until the end are likely to feel betrayed by the story’s lack of resolution.

An overlong first act that doesn’t quite live up to its epic ambitions.