Connect with M. B. Clark

M. B. Clark is an overly expressive person who sees nothing as off-limits. She earned a Bachelor of Fine Arts in Dance from the University of Michigan, Ann Arbor in 1989, and went on to independently produce and direct her own theater productions in Boulder, Colorado. Later, she studied English and education at CU-Boulder. She had a bit of an acting career in Hollywood, appearing in theater productions as well as commercials. She harbors fantasies of "getting back out there", but for the moment is still hanging out in her cabin in the woods of Michigan and getting a decent amount of writing done. Her interests at the moment include writing comedy and books, as well as travel and adding to her landscape photography collection (collectionsbymerry.com). As an ovarian cancer survivor, and caregiver for her mom who has Alzheimer's, she is concerned with addressing women’s health and economic issues. As a former teacher, she is concerned with the glaring inequities in American education. As a woman who grew up on an organic farm with parents who were at the forefront of this movement, she is a die-hard environmentalist. As an expressive artist, she values her freedom of speech more highly than anything else (except planet Earth). Her first book was "Stripping Down to the Bones" which was completed in 2013. "Waxing Pathetic" is her second book and would make a great basis for a sit-com called "One and a Half Broke Old Ladies".

“Clark’s prose is frenetic and engaging, combining self-referentiality, humor, deconstructionist tendencies, and even a bit of friendly antagonism toward readers: “Some people complain that my transitions are abrupt, and I jump from one episode, time frame, or topic to another, but I am merely subverting expectations and avoiding predictability, to ensure the reader that no algorithm wrote this stuff.””
– Kirkus Reviews 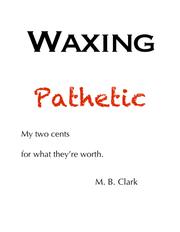 Clark (Stripping Down to the Bones, 2013) recounts her life’s indignities in a self-deprecating memoir.

“Pathetic” would probably not be the first term that most people would use to describe their own lives. “I like the word,” Clark writes in her introduction. “It’s not sad, it’s more like pitiful. It kind of wallows around and whines a lot, even though the whining is probably justified. It also connotes a certain obsessive cyclical pattern.” In this memoir, she includes some diary entries and essays that she wrote during her teenage years, which document her first crushes; her ambitions at 12 years old, which included, “I’d like to be a person everyone would like”; and dates. She attempts to explain her later lack of success at romance, discussing, for example, how she misunderstood certain sexual terms and made unfortunate choices in men. She tells of three different cancer scares, which included a hysterectomy, and how they affected her self-image, quality of life, and plans for the future. She also writes about why she decided to become an exotic dancer—“the Thinking Man’s Stripper”—and how that work shaped her ideas about her own sexuality, feminist identity, and American society. Clark’s prose is frenetic and engaging, combining self-referentiality, humor, deconstructionist tendencies, and even a bit of friendly antagonism toward readers: “Some people complain that my transitions are abrupt, and I jump from one episode, time frame, or topic to another, but I am merely subverting expectations and avoiding predictability, to ensure the reader that no algorithm wrote this stuff.” The narrative is largely free from the constraints of traditional structure, which only adds to the sense that the reader is inhabiting the author’s mind. Clark is insightful and funny and seems to always have a new, more surprising anecdote to share—all while tying her experiences into the larger framework of being a woman in contemporary American society. What the book occasionally lacks in polish it makes up for in raw exuberance and hard-won wisdom.

"If you have built castles in the air, your work need not be lost. That is where they should be. Now put the foundation under them." Thoreau

Stripping Down to the Bones