Mack W. Borgen is a graduate of Harvard Law School and a national award-winning author for his first two volumes of Dead Serious and Lighthearted - The Memorable Words of Modern America and for his prior books, The Relevance of Reason (Vols I and II).

He is a native of Montana and was raised in the Pacific Northwest and the Midwest. Upon graduation from the University of California at Berkeley with Honors in Economics, he delivered one of the last University-wide Commencement Addresses. Then, after graduating from law school, he served more than four years in the U.S. Army.

He lived in Europe for a short period before returning to California and Montana where for years he has simultaneously practiced law and continued to write about various economic, political, and social matters.

In 2008, he partly withdrew from both business and his law practice in order to devote himself to the writing of a long-planned series of books about the current American condition and about how we, together, gently, honorably, and as a country, can do better. In the last four years, he has devoted much of his time to the writing the three volumes of Dead Serious and Lighthearted - The Memorable Words of Modern America. Over his career, Borgen has also taught at various times at Rutgers University (Camden, NJ)(History of the Labor Movement) and the University of Virginia (Charlottesville, VA) (History of the Supreme Court), and, more recently, in Santa Barbara, California. He now lives with his wife and son in Santa Barbara, California. Mack W. Borgen's blogs and excerpts from his other writings and speeches may be viewed at mackwborgen.com.

“Borgen (The Relevance of Reason, 2013) bravely undertakes the herculean task of presenting an overview of recent U.S. history... Crucially, the author follows each of these entries (of the Memorable Words from Speeches, Books, Writings, and Other Sources) with a concise explanation of 'context, meaning, and impact' ... (T)he volume retains a depth that goes far beyond simple nostalgia. The work's approach to the study of history may inspire the search for commonalities without erasing differences. ... A solid and entertaining reference book packed with cultural highlights and pivotal moments from a wide array of sources.”
– Kirkus Reviews 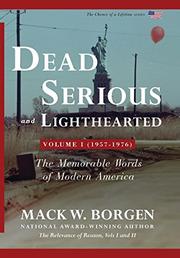 This first installment of an American history series covers 1957 to 1976.

Borgen (The Relevance of Reason, 2013) bravely undertakes the herculean task of presenting an overview of recent U.S. history. In the book’s early chapters, it is clear that he recognizes the challenges inherent in curating such a gargantuan project, taking great pains to justify the setting of parameters. First, the author neatly summarizes the problematic nature of history as a discipline of study. Even the choice of an official start date for what he terms Modern America is a cause for much understandable hand-wringing. He eventually settles on his selection: “In 1957, even amidst the consumerism, confidence, and enthusiasm for all things American, the ferment of change was starting. The winds of change were everywhere.” Borgen also points to the cultural effects of increased life expectancy, whereby four generations coexist, often uneasily, which creates room for misunderstandings and frames of reference that do not match up neatly, a phenomenon that he terms “multi-generational ignorance.” Thus, the author asserts, this project can serve a dual purpose: A younger audience encounters information perhaps for the first time, and older readers revisit past memories, with both groups hopefully gaining a broader perspective. As Borgen begins to move through the designated years, some portions of the text have the feel of an almanac, with lists that include bestselling books, Oscar-nominated films, highly rated television programs, and popular slogans from the worlds of politics and advertising. But each year also features a more substantive section titled “Memorable Words from Speeches, Books, Writings, and Other Sources.” Crucially, the author follows each of these entries with a concise explanation of “context, meaning, and impact.” Likewise, he includes information about seminal books that appeared within the same year, at times producing delightful juxtapositions like these three titles from 1957: Atlas Shrugged, On the Road, and The Cat in the Hat. While readers may notice the occasional minor error—such as rendering the TV series Charlie’s Angels as “Charley’s Angels”—the volume retains a depth that goes far beyond simple nostalgia. The work’s approach to the study of history may inspire the search for commonalities without erasing differences. As a bonus, Borgen provides helpful ancillary resources, including an index, 376 endnotes, and many appendices.

A solid and entertaining reference book packed with cultural highlights and pivotal moments from a wide array of sources.

The Glory and the Dream by William Manchester

You will do crazy things in your life, but do them with enthusiasm.

Believing (passionately) that some day I will discover one ...

Trying to be a good husband, a good father, and a steady and welcoming friend to all .. and hiking the trails of Northwestern Montana

If you really want to know America, then read its Memorable Words -- the real currency of American life, which by their passion, eloquence, prescience, or wisdom frame our history and reveal our past. Thus book (together with its associated Volume I (Years 1957-1976) and soon-to-be-released Volume III (Years 1994-2015) introduce history in an entirely new way -- without the tired stories and heavy words; without the litany of "isms" and "ologies." The Memorable Words, both the dead serious and the lighthearted, are carefully presented by year -- the fascinating and frivolous; the tragic and momentous; the eloquent and bumbling; the touching and endearing -- from Ike to Obama, from Lucy to Lady Gaga. Written without agenda, these books carefully identify who said what and where--exactly. These books can help us know our country, lift our spirits, better remember who we are, who we were, and from whence we came. This second volume presents the words from 19977 to 1993 -- the "Middle Years" of Modern America -- from Star Wars to Schindler's List; from the efforts of Carter to the emergence of Reagan and the GoGo Eighties; from the arrival of the culture wars and the rise of hyper-partisanship to the impacts of globalism and the omnipresence of the Internet.
Published: Aug. 13, 2018
ISBN: 978-0-9997299-3-9

For those who care about the truth and rely on the power of reason, this book delivers hope and a foundation for creating a better future for our country and our people. In an age when political agenda trumps truth, when political one-upmanship seems to be more important than the public good. and when the economy is both hostile and unforgiving, having access to the unvarnished facts about our country can make a world of difference. The Relevance of Reason - Business and Politics uses facts to lay the foundation for gaining a true understanding of where we really are. By looking at "Modern America," our country from 1957 to the present, and "Current America," the cuntry as it is today, we can examine our situation with both context and perspective. Mack Borgen's only agenda is to present a wealth of facts neutrally so people of all political, economic, and philosophical persuasions can engage in thoughtful consideration of what's really wrong and how we can make it right.
Published: June 14, 2013
ISBN: 978-0-9893996-0-9