Maija Rhee Devine, a Korean-born writer and survivor of the Korean War, whose fiction, nonfiction, and poetry have appeared in Michigan Quarterly Review, Boulevard, North American Review, and The Kenyon Review, and in anthologies, holds a BA in English from Sogang University in Seoul and an MA in English from St. Louis University. Writing honors include an NEA grant, finalist in William Faulkner Creative Writing Competition and Emily Dickinson Poetry Award, and nominations for the Pushcart Prize and O. Henry Award.

The author is married to Michael J. Devine, the director of the Harry S. Truman Presidential Library in Independence, MO.

Works in progress:
*Journals of Comfort Women, a book of poems ( a novel later) about Korean women who were forced to provide sexual services to Japanese soldiers during World War II
*Three Faces: Portraits of Modern Korean Women
*What Was Not Said in the Bamboo Grove, a collection of short stories
*Never Pick the Fifth of the Month for Your Birthday, a collection of poems
*Geese, Snappers, and Peonies, a collection of nature-inspired poems

Her presentation includes a power point of photos that go with the stories in The Voices of Heaven. The tales include a uniquely Korean love story, the stories of the Korean War and its impact (especially on women and children), and the relevancy of the traditional values that shaped the events in the novel to today’s high-tech Korea. 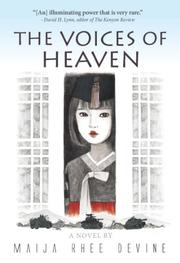 THE VOICES OF HEAVEN

Eum-chun and her husband, Gui-yong, have been married for 15 years and are deeply in love. Although they adore their adopted daughter, Mi-Na, they fail to produce a son—a serious problem in their deeply traditional society. Gui-yong eventually gives in to his mother’s wishes and marries a second woman, Soo-yang, hoping she will deliver a boy to carry on the family name. Although Eum-chun tries to bear the situation bravely, she’s devastated, and cracks soon begin to form in the seemingly perfect family. The novel, set against the backdrop of the Korean War, follows four main characters as they navigate their new family and the chaos that ravages the land. Devine’s prose richly describes everyday life in 1950s Korea, and the war effectively parallels the battle raging in the family home—an insurmountable rift divides the family, just as it does their country. It’s a realistic sketch of a Korea that few Westerners have seen, depicting a patriarchal society that limits women’s choices, and each character faces a unique battle stemming from that unfortunate situation. Each of their stories is rich with emotion, and their problems give the novel depth and complexity. Most compelling are the struggles of Eum-chun, Mi-Na and Soo-yang as they fight to create their own identities; although they all fight similar battles, they cannot fight them together, as their society has driven wedges between them. Their resulting stories are often melancholy and achingly beautiful.

A complex, uniquely Korean love story that shouldn’t be missed.

William Faulkner. My Master's thesis was on Faulkner's "Light in August" and C.G. Jung's concept of the Self.

THE VOICES OF HEAVEN: Short-listed for The O. Henry Awards: Prize Stories, 2000