Author Marc Jacobs has always looked to the stars as a reminder of humanity’s minuscule place in the universe. Marc finds inspiration in the science fiction genre because it feeds the imagination and keeps people believing in a greater world of possibilities. In THE COORDINATE, the first novel in Marc’s new science fiction series, he explores the question which has remained unanswered throughout the history of mankind, “Are we alone in the universe?”

When Marc is not writing, he lives in California with his wife, two daughters, two cats and an unapologetic English bulldog who runs the house, much to the chagrin of the cats. Marc is also a cartoonist whose work has been published in magazines, journals, newsletters, and websites across the country and even internationally!

“In his debut novel, Jacobs tells a Dan Brown–style adventure story for a high school audience... Entertaining on several levels, and sure to win fans for a planned series.”
– Kirkus Reviews 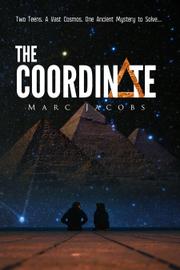 Two teenagers embark on a school project that turns into an exciting, dangerous, and globe-trotting adventure in this YA sci-fi novel.

For 17-year-old Logan West, an upcoming history project represents a chance to reconnect with fellow student Emma James. He’s had a crush on her since second grade, when they were close friends, but they lost touch as they grew older. Now they’re both seniors at Jersey North High School, and they’ll soon be going their separate ways. But first, they’re partnering up to research the Secret Chamber of the White-Eyed Star God in the Copán Temple in Honduras. Its smoothly curved cave walls are inscribed with Mayan hieroglyphs—myriad four- to seven-digit numbers that experts still don’t understand. Logan and Emma soon discover a major obstacle to the project—all the web links to images of the numbers are now dead. The determined teenagers soon launch a search that sends them deep into the darknet. Along the way, they find out the secret of the Mayan numerals, involving a mysterious Norwegian named Albo, and go on a journey across America and abroad. Dangerous international criminals and U.S. intelligence operatives also pursue these secrets, but they have no concept of what the shocking truth means for humankind. In his debut novel, Jacobs tells a Dan Brown–style adventure story for a high school audience—one that’s full of puzzles to decode and bold, perilous actions. There’s plenty of room for reader skepticism, and the central premise, in particular, requires some suspension of disbelief. Nevertheless, the story holds together thanks to some good mathematical puzzle-solving and insights by both Logan and Emma, who make an excellent team. Jacobs keeps the plot moving throughout by introducing unexpected twists and developing relatively minor characters, such as a comic-book store manager.

Entertaining on several levels and sure to win fans for a planned series.