Margot Jarvis Genger - Poet, videographer, teacher, truck driver, mental patient, wife, and mother of two. Her poems have been published in The North Coast View, HSU Toyon, California Association for the Gifted Quarterly, and also appear in her chap books; Before Waterfalls and Middle Chapter.

“...The overall result is, by turns, an emotionally intuitive memoir and a rip-roaring American road story in the Jack Kerouac tradition—one with a valiant protagonist that readers will root for.”
– Kirkus Reviews 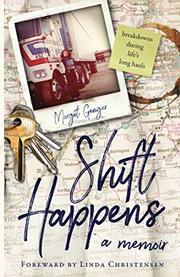 Debut author Genger relates the story of her life as a long-haul truck driver dealing with mental illness and alcoholism.

The author was born and raised in Eureka, California, where she grew up in a “huge house” maintained by a housekeeper and enjoyed vacations to Mexico in her father’s private airplane. However, the memoir begins later, in June 1977, when her fiance drunkenly stepped out of a moving pickup, fracturing his skull—an event that led her to realize that she “didn’t have to marry the lying, argumentative cokehead after all.” Her life descended into a rapid tailspin, and the author goes on to describe what she refers to as “the story about myself that I can’t yet hear,” involving psychotic episodes, institutionalization, a failed suicide attempt, and a moment of dazzling epiphany when she realized, “If I can’t even die, I might as well live.” This turned out to be the beginning of an engaging adventure, as Genger trained to be a cross-country truck driver and took to the road. Her tales of weird and wild characters, intimidating locations, robberies, and breakdowns are worthy of a picaresque novel. Genger is an amazingly descriptive and expressive writer who deftly captures the nauseating unsteadiness of her mental illness: “I sat there, miserably uncomfortable, on the sticky plastic seat, unable to move, feeling sick with all the visuals whizzing by. Telephone poles hit my eyes, bushes blurred like tripping on acid.” She also possesses the ability to switch gears and deliver high-octane prose: “I lay on the horn. Ran the red light. Barreled directly toward the back of his truck.” The overall result is, by turns, an emotionally intuitive memoir and a rip-roaring American road story in the Jack Kerouac tradition—one with a valiant protagonist that readers will root for.

An inspiring and evocative memoir.

learning, art, my husband of 35 years