Maria was born in Greece and spent her childhood in Zambia, Africa. She received her BA and MA Degrees in English from the State University of New York at Albany and her doctorate degree from Boston University. She has written (Shared Purpose, AMACOM, 1997) and presented widely. Maria lives in Massachusetts with her husband, their dog and two cats.

“A wonderful, well-illustrated look at the relationship between a grandparent and granddaughter who live miles apart.”
– Kirkus Reviews 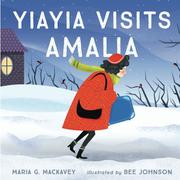 A grandmother navigates the route from the suburbs to the big city in this book about travel, kindness, and love by Mackavey (The Artist and the Lava Beast, 2013), with illustrations from Johnson.

Yiayia is prepared to visit her granddaughter. After her dogsitter arrives, she gets into her small blue car and drives away from her rural home and off toward the city. She’s soon surrounded by other vehicles, with her car crouched between a yellow school bus and a green-and-red truck, both vibrantly portrayed. Yiayia arrives at the train station, where people crowd the escalators; she hurries aboard the train and finally has a moment to relax. Through Yiayia’s looking at photos on her smartphone, the story reveals that her granddaughter and daughter-in-law are of Korean heritage and that the family is a happy, loving one. When Yiayia reaches Penn Station in New York City, she finds herself surrounded again, and it isn’t until she hails a taxi that she realizes she’s lost her baggage. At the lost-luggage claim, a worker helps her pick out the right blue bag. Observant readers will notice the right bag right away, but they’ll enjoy Yiayia’s fun refrain (“That’s much too round….That’s much too big!”). After recovering her bag, she grabs a taxi and finally makes her way to Amalia’s apartment, where her granddaughter greets her with a warm hug. The story here is slight, but Johnson’s pitch-perfect illustrations bring it to life. It’s exceptional in its diversity, as it clearly indicates that Amalia’s parents are from two different cultures. Children who are interested in modes of transportation will happily pick out several that Yiayia uses, and emergent readers will notice the bold text of “taxi” and “PENN STATION,” which they may sound out as adults read to them.

A wonderful, well-illustrated look at the relationship between a grandparent and granddaughter who live miles apart. 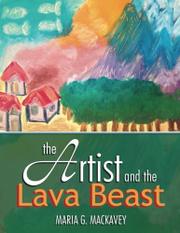 The Artist and the Lava Beast

A painting comes alive in this read-aloud picture book for children.

The book starts with a large, white canvas; soon, an artist picks up oil sticks and begins to draw a mountain, a forest, a sea and a small school of fish. The artist, who has so far been in total control of his work—a benevolent creator bringing life to a new little world—eventually notices that the fish are acting strangely. All but one are swimming furiously away from something, and it soon becomes clear that an orange finger of lava threatens not only them, but a cozy town nestled on the mountainside—and the artist fears that the entire painting may be at risk. The tone of Mackavey’s (Shared Purpose, 1997) gentle, lyrical prose effectively complements the pastels that illustrate each stage of the painting’s creation. The transition from the expected to the unexpected is smooth and intriguing; she makes every color and element of the painting its own character and elicits just enough reader concern for the fates of the fish and the houses without being too frightening. She also avoids being too literal when depicting the lava beast, showing just the head of the lava flow in swirls of brownish red oil pastels. In the text, the beast becomes sympathetic—lonely, scared and unsure of himself. He longs for the houses’ cozy, well-lit interiors and eventually comes to rest, cooling finally into rock against the edge of the village. This would have been a fine place to end this sweet story, but it continues instead with the lava beast’s dream—a confusing, abstract depiction of a volcanic eruption, which segues into the artist’s waking up from his own dream, a device that unfortunately doesn’t serve the first half of the story well. Overall, this book falls between genres, as it may be too long to read to most toddlers but too slow and simple to grab older children’s interest.

An often engaging children’s story that starts well but might have been stronger if it were shorter.

This book provides an insightful look into the complexities of the interconnectedness of all our institutions and supplies creative solutions, recommendations, and current examples of how businesses can begin constructing a useful way of supporting families and creating high-performance workplaces.
ISBN: 0-8144-0388-3 52495