Connect with Mark A. Johnson

It is highly unusual for a published research scientist and mathematician to have a revelatory moment in which one's bodily sense of existence is overcome by a non-localized spiritual sense of an enduring interconnectedness with one's world. It is equally unusual for two soulmates, a financially struggling farmer and a salaried music teacher, to document in letters (with the exception of two brief visits) their entire courtship. Mark Johnson is that scientist and that farmer and teacher are his God-centered parents, Walter and Margaret.

For years Mark enjoyed living the new understandings flowing from his "Little Self" view of the world, but he could not find a satisfying way to share his understandings other than in serendipitous encounters. His search was interrupted when his parents' courtship letters surfaced. They were written shortly before WWII. Ironically, his parents expressed their desire to find ways to testify to their Christian faith in the same letters in which they explained how that faith brought joy and meaning to their lives. In sharing their written testimony in his trilogy, A Lettered Courtship, Mark is finding a natural context for sharing his own.

In the first book, Encountering God, the reader sees the many unique ways in which understandings of God brought joy and meaning into the lives of Walter and Margaret back in the fall of 1937. In the second book, Questioning God's Will, the reader sees how naturally that questioning repeatedly arose for both of them in the winter of their courtship. The reader is also treated to some interesting perspectives on three pivotal concerns implicit in their winter letters: our fundamental sources of truth, the coming world order, and the "open tomb" of Easter. In the anticipated third book, Abiding in God, the reader will be given an inside look into the many issues faced by a rather idealistic couple trying to set up a home and get married in an all too realistic world. Mark will also be linking up the joy he finds in his Little-Self view of our interconnectedness with comments and understandings in the letters. 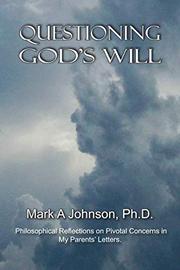 This second book in Johnson’s (Encountering God, 2015, etc.) trilogy revolves around the correspondence between his parents during their courtship in 1930s Colorado and North Dakota.

The news of the day was considerably dark: Armies were moving in Europe, and the shadow of unprecedented economic hardship stalked America. Young Walter Johnson and Margaret had recently become engaged but were far apart from each other, connected mainly by two things: the post and their shared Christian faith. Their letters are unrelentingly, almost endearingly somber, full of earnest professions of mutual devotion and copious quotations from Scripture. As in the trilogy’s first book (thanks to Johnson’s skillful editorial presence, any new readers can start with this volume and not feel like they’re missing anything), the mood of intense young love is lightened occasionally with talk of potatoes, livestock, and the low-key but persistent pleasure both Walter and Margaret obviously took in the beauty of their natural surroundings. But their main concentration in these letters was decidedly otherworldly. Each began almost every letter with a quote from Scripture, proceeded with frequent allusions to their faith (Margaret took the lead here), and closed with a blessing. It’s not empty piety. Their conviction was obvious, and it’s balanced by a good deal of pragmatic detail, but both the letters themselves and Johnson’s lengthy interpolations leave no doubt: This is as much a Christian colloquy as it is an epistolary memoir. “I am glad the future is veiled,” Margaret wrote in a March letter. “I used to long to know, but God has led me thus far, and He will continue to do so if I but put my trust in Him.” This amount of stiff piety can make for occasional tough going. The Scopes Monkey Trial was still a living memory for Walter and Margaret, and the state of their world—with Nazis abroad and Depression at home—gave them the feeling of a radically unstable world for their faith and perhaps a concomitant urge to overcompensate (at one point Walter confesses that he can’t always think of a Scripture passage to start a new letter, for instance, and then immediately writes that when he’s stuck, he prays about it, and God suggests something). Curiously, the book’s main strength comes from Johnson’s decision to broaden and deepen this questioning in his editorial commentaries on his parents’ lives and faith. He respects the fundamentalist simplicity of their beliefs but also gently interrogates it. He adds welcome texture to their literal biblical faith, expanding on their views with discussions of metaphorical interpretations of things like Noah’s Flood or the Tower of Babel and contemporary concerns like climate change or the threat of nuclear war. Johnson sees the faith of his parents as a main theme in their courtship, and his own views of the separate “magisteria” of science and faith make for every bit as interesting reading. Includes black-and-white photos of the letters.

A fascinating although occasionally stilted setting of old-fashioned Midwestern faith in a wider modern context. 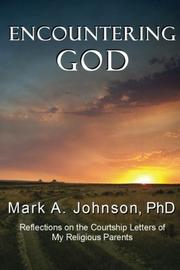 The story of a Christian relationship, revealed in a series of letters.

Johnson’s account of his parents’ courtship and marriage opens by characterizing it as “a look into the life of two western farming communities in the late 1930s as seen through the eyes of two evangelical Swedish-Lutherans,” which might strike many readers as unpromising material for a gripping story. But through judicious quotations from his parents’ letters, couched in his own contextualization and observations, Johnson manages to create a quietly captivating picture of two deeply religious people gradually learning about each other. Walter was a farmer in Colorado, and Margaret was choral director and English teacher in North Dakota, and the initial spark of chemistry between them when they met at a church outing prompted the correspondence. Letter writing didn’t come easily to Walter, who confessed up front, “I do not know how to start one, I have trouble finishing them and I do not know what to put in between.” Margaret comes across as a more forceful character from the start, and their letters are full of topical references (as when Walter talks about freedom: “Our nation fought the revolutionary war to gain religious and political freedom. We fought to free the slaves from their bondage. Theodore Roosevelt fought to free us from the bondage of great trusts being organized at that time”) as well as abundant quotations from Scripture. The biblical quotations never feel forced or browbeating; rather, they convey a remarkably delicate impression of two strong-willed and very different personalities, growing steadily in affection for each other. Johnson smoothly fleshes out this epistolary skeleton with his own theological observations. These interjections (such as, “Helplessness and hopelessness naturally follow when we focus on the failures of others and concentrate on causes that we can do nothing about”) could easily have felt like interruptions, but Johnson makes them work, and the result is a moving glimpse into a very different time and place.

Love your neighbor as yourself

Correspondence Courtship Takes Readers Back to a Simpler Time, 2019