Mark Bergin's debut crime novel APPREHENSION is now available for preorder from Inkshares/Quill publications of Oakland, Ca.in e-book and paperback. go to inkshares.com/books/apprehension to buy, and to read the first chapter.

Bergin retired from the Alexandria, Virginia Police Department as a Lieutenant after 28 years and, in the end, two heart attacks.  He was twice named Police Officer of the year, for drug and robbery investigations.  Prior to police service he was a newspaper reporter in suburban Philadelphia, Pennsylvania, and in Northern Virginia where he earned the Virginia Press Association Award for General News Reporting.

Born in Philadelphia and a graduate of Boston University, he splits his time between Alexandria and Kitty Hawk,  North Carolina with his wife, grown daughter and son and a new dog. He is a member of International Thriller Writers, Mystery Writers of America and Sisters in Crime.

“Compelling... Bergin, a former reporter and a policeman, writes with authority and empathy about cops...A gritty and authentic new voice in police fiction”
– Kirkus Reviews 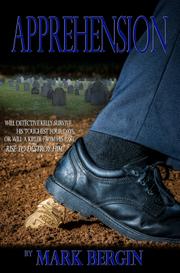 Over the course of four bad days, a good cop finds everything he holds dear at risk in this debut novel.

John Kelly, an eight-year veteran of the Alexandria, Virginia, police force, has been in something of a downward spiral over the past year since Emma, his niece, was slaughtered in front of him by a man named Edward Falkner. The killer would later die in prison, robbing Kelly of closure in the case. Haunted by his inability to protect Emma, and shunned by his embittered brother, Kelly is now estranged from his wife, Janet, and bound for divorce. “He felt good only because he was a cop,” Janet tells one of his colleagues. “But less lately.” How much less? Kelly counts the ways, including the unraveling of a seemingly open-and-shut parental abduction case in which the father was going to sell his 8-year-old son to a pedophile. Also in jeopardy: Kelly’s new and redemptive romantic relationship with an assistant public defender. Most critically, a reckless and shocking act of violence could have repercussions in a possibly related infant rape case and send him to prison. Kelly is the compelling “A” story, but this tale expands Crash-like to interweave subplots, including a veteran patrolman teaching a recruit in training the facts of cop life, and a case focusing on a teenage drug dealer who believes voodoo will set him free. There’s also a female officer to whom what happens after she is involved in a justified shooting is a real crime. Bergin, a former reporter and a policeman, writes with authority and empathy about cops. He flirts with cliché but doesn’t fully step over the line. The bureaucratic red tape and legal obfuscations are maddening. “Are you in Disneyworld?” an attorney for the city tells Kelly. “We don’t tell the truth in court. We tell little bits we are allowed to. We tell snippets that we can get away with, that are admissible, that are connected. We avoid things that are inflammatory or suggestive because they could be considered unfair.” While there are a few typos (for example, “hadgun” instead of handgun), these are minor infractions.

A gritty and authentic new voice in police fiction.