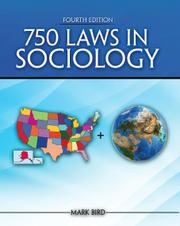 An eclectic mix of sociological facts, opinions, and other fodder for the curious.

Bird (Sociology/Coll. of Southern Nevada) explains from the outset that the titular “laws” aren’t meant to be understood as laws in a legal sense but rather as generalities and probabilities about human, societal, and even environmental behavior. He argues that although these laws may not be immutable, they are well-founded in social scientists’ repeated observations over time and deserve to be given due weight. Their scope is international, but they place an emphasis on the contemporary United States. Bird asserts that sociological predictability is far better than people generally suppose: “Although many people do not realize it, the predictive accuracy of many areas of sociology is now comparable to moderate-range meteorology,” he writes; for example, he says, the chance of divorce is predictably higher among couples that lived together before marrying. Bird makes ample use of statistical tables and is nothing if not inclusive, giving space to war, crime, suicide, family violence, education, Hispanic and Amish cultures, bureaucracies, religion, health, immigration, gas prices, and other subjects. One chapter references Chris Prentiss’ 2011 self-help book The Laws of Love; another enumerates laws of Western civilization, drawing on Niall Ferguson’s 2011 history book Civilization. Bird’s ability to synopsize and reduce laws from disparate works, studies, and theories is variable, but it certainly adds scope to the work, and readers will admire his research. At times, however, he seems to stretch the bounds of sociology too far and inject his own personal opinions. Chapters on “laws” of global warming and water tables, for example, seem less like sociology and more like dire warnings based on statistics and studies. Bird also presents various factors that he says show that the United States is in precipitous decline, and readers may question if such prognostication is within the domain of sociology or more the purview of historians.

An engaging but overreaching sociological treatise.