Mark Tucker has a powerful message of hope woven into his writing as well as his speaking. He is the vice president of personal relations at the "Sound Off" Toastmasters club, owns and operates Reach For It Fitness (personal training studios), is a graduate of The National Academy Of Sports Medicine and a certified personal trainer/nutritionist. Mark has appeared on several talk shows such as KING 5 CBS New Day Northwest, KATU 2 NBC AM Northwest, CBS Live from the Square and KXL 101.1 News talk radio. His story is giving people hope that they can rise above their circumstances no matter how far down the scale of life they have fallen. Tucker has transformed his hard won life experience into a motivational speaking career where he delivers a clear cut path to a better quality of life through S.M.A.R.T. goals, mindfulness, and self awareness. He speaks to prison populations, Juvenile detention centers, outreach programs, treatment centers and corporations. "While Tucker and co-author Richman do a remarkable job conveying an almost excruciating sense of tension, they are equally adept at portraying the daily minutiae and preoccupations of the addict, such as Tucker's visceral depictions of withdrawal or his expert scamming of Nordstrom." Kirkus review

“While Tucker and co-author Richman do a remarkable job conveying an almost excruciating sense of tension, they are equally adept at portraying the daily minutiae and preoccupations of the addict, such as Tucker's visceral depictions of withdrawal or his expert scamming of Nordstrom." Kirkus review”
– Kirkus Reviews 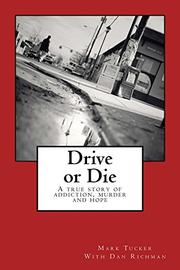 In this harrowing yet witty memoir, Tucker, a former heroin addict and alcoholic, recounts his experience being held hostage by a brutal madman on a nightmarish road trip.

A native of the Pacific Northwest, Tucker was a longtime alcoholic and drug addict when he had the misfortune of crossing paths with James Moran, aka Juan Martinez—Mexican Mafioso, member of the notorious 18th Street Gang, and, unbeknownst to Tucker, the eighth most wanted man in America. Living rough and strung out on heroin, Tucker agreed to drive Moran to visit his father’s grave in the Ozarks in exchange for dope and a sizable cash payment. In order to drive Moran, and unperturbed by the doctor’s warning that he might lose a leg, Tucker discharged himself from the hospital where he was receiving treatment for a dangerous drug-related infection. Shortly after hitting the road, Tucker realized that Moran was paranoid, highly unstable, and a likely murderer. Erratic and in possession of a .38 caliber revolver, Moran began barking orders, attempting to shoot rivals, and questioning Tucker’s loyalty while threatening his life and those of his friends and family. À la Tarantino meets Kerouac, the two traversed the Northwest, trying to generate income by unloading drugs and meeting other addicts along the way, such as the professional huckleberry picker who foraged to finance his and his partner’s habits and young Carrie Anne Blackford, who became Moran’s second hostage. Tucker struggled to manage his addiction as Moran’s paranoia and violence intensified, and Tucker and Carrie evaded repeated near executions and emotional torment only to unwittingly get entangled in a brutal double homicide. The violent conclusion of the hostage situation was only the beginning for Tucker, who found himself a suspect rather than a hero after bringing an end to Moran’s reign of terror. While Tucker and co-author Richman do a remarkable job conveying an almost excruciating sense of tension, they are equally adept at portraying the daily minutiae and preoccupations of the addict, such as Tucker’s visceral depictions of withdrawal or his expert scamming of Nordstrom. Prose perfectly captures all the mania, giddiness, and raw terror of the dire situation, and the authors’ penchant for dark comedy is fantastic, as with a recollection of scouting for dope in Mormon country.

"Action is the blossom of a mans thoughts. Joy and suffering is its fruits"