Mark Holtzen grew up near Portland, Oregon. He enjoys cycling, eating popcorn, and air drumming. He spends much of his time absorbing great storytelling in all forms. An elementary school teacher for many years, Mark now teaches gifted students at an independent, K-8 school. He lives with his family in Seattle.

“Clarity, engaging characters, and a surprise or two make for a delightful tale for young readers.”
– Kirkus Reviews 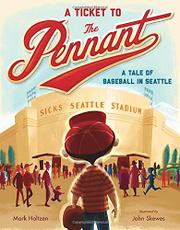 A TICKET TO THE PENNANT

Huey frantically searches for his ticket to the big game at Sicks’ Stadium in Seattle, but he can’t find it anywhere. Will he miss the game?

In 1955, baseball fans in Seattle cheered for the minor league Rainiers. Olive-skinned Huey has his glove, cap, and shirt and is on his way to see that pennant-decision game, but he needs to find his ticket. He races through his neighborhood, hearing snippets of the pre-game show and the first innings on all the radios as he visits the places where he might have lost the ticket. His neighbors and shopkeepers—representing a variety of ethnic groups—are invariably friendly and encouraging, but none of them has seen the missing ticket. Of course he discovers that he has had it all along, hidden in his hat, and gets to the game by the fourth inning. There, he has a grand time with his neighbors and friends as they watch the Rainiers win the pennant. Holtzen recalls the sights and sounds of 1950s-era Seattle, naming streets and bus routes, shops and shopkeepers, radio announcer and players. Huey is a delightful little baseball lover who remains mostly cheerful and hopeful throughout his ordeal. Skewes’ bright, retro-flavored cartoons complement the text, vividly capturing the time and place as well as Huey’s changing emotions.

Sweet and wistful nostalgia for a bygone era. 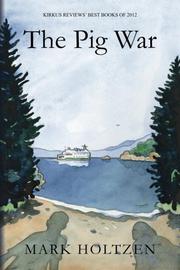 A boy’s summer with his grumpy grandfather turns into a fun adventure on an island in the Pacific Northwest in this contemporary middle-grade novel.

In his fiction debut, third-grade teacher Holtzen captures the attention of young readers with a tale inspired in part by a historical event: the Pig War, an 1859 boundary dispute between the U.S. and Great Britain. Kell and his younger sister, Grace, must spend their summer with a grandfather they’ve never met on Mobray Island in the San Juan Islands, an archipelago in the state of Washington, after political unrest abroad disrupts their parents’ travel plans. The boy takes one look at his grandfather and his primitive cabin and decides his summer is going to be terrible; but he soon finds an old pistol and a 19th-century diary. While trying to keep an eye on the rambunctious Grace, Kell becomes absorbed in solving the mystery of the artifacts. Life on Mobray Island turns out to be more fun than he first expected, and when he reunites with his parents, he’s sorry to say goodbye to the island and his grandfather. Kell is a likable character, and many young readers will identify with his frustrations about life on the isolated island. Children may also relate to his early disappointment about having to visit an older relative, which emerges when Kell becomes annoyed with his grandfather and thinks, “All you do is make weird sounds with your mouth.” The mystery of the journal and gun, as well as Grandad’s mysterious “fishing” trips, will keep readers turning the pages to find out what happens next. Readers in the Pacific Northwest will especially appreciate this novel, while a dash of suspense and adventure give it a broader appeal.

Clarity, engaging characters, and a surprise or two make for a delightful tale for young readers.

Having fun while working hard.