Mark M. Bello was born in Detroit, Michigan and has been a Michigan attorney for over 40 years. He received his bachelor of arts degree in English Literature from Oakland University in Rochester, MI and his law degree from Western Michigan University's Thomas M. Cooley Law School in Lansing, MI. He and his spouse, Tobye, have four children and 8 grandchildren. He is the author of three Zachary Blake Betrayal Legal Thriller series novels. These novels pay tribute to actual events and Michigan cases he handled, the brave clients he represented and the many attorneys and clients who have fought their own "David vs. Goliath" battles. His fourth novel, Betrayal in Black is scheduled for release in 2019. 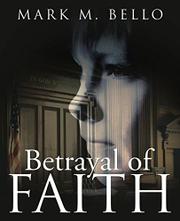 In Bello’s debut legal thriller, a case against a pedophile priest in Michigan leads a lawyer to confront a secret organization that’s willing to go to great lengths to protect the church.

Jennifer Tracey’s sons have had trouble adjusting in the three years since their father died. But after a church-sponsored, overnight camping trip, 14-year-old Kenny and preteen Jake become especially distant and anti-social. Jennifer believes that something happened at the overnighter, and she zeros in on Our Lady of the Lakes Church’s assistant pastor, the Rev. Gerry Bartholomew. Psychiatrist Harold Rothenberg later confirms her fears that the pastor molested her boys. She opts to take her fight to court, believing that the publicity will force the church to take action and ultimately prevent Bartholomew from hurting another child. She goes to the only attorney she knows, Zack Blake, who’d handled her late husband’s industrial accident. After Zack was booted out of his law firm by his partners, he lost almost everything in his divorce, and he hopes for an easy paycheck by settling Jennifer’s case. But she’s more interested in justice than money. Meanwhile, it turns out that a clandestine group called the Coalition is fully aware of the pastor’s disturbing penchant, and due to their machinations, Zack’s investigator, Micah Love, has difficulty finding other families that the priest has harmed—although he does find a dead body. In this dramatic thriller, Bello handles the delicate subject of sexual abuse of children with tact, making clear what Bartholomew did without explicit details. In a wise move, the author sporadically returns the focus from the main characters to the story’s victims: Kenny and Jake. Although the eventual trial covers plot points that readers already know, the characters remain dynamic. Jennifer has unwavering determination (she says no to plea offers in the millions); Zack is initially unlikable as he treats the serious case as a money grab; and the Coalition’s leader, the Voice, is eerie in his anonymity. But although a few characters sing the praises of modern technology, the language on that subject doesn’t seem quite as up-to-date; cellphones, for example, are referred to as “mobile phones,” and the word “DVD” is used for both the disc and the player.

Engaging characters elevate this courtroom drama beyond the conventional. 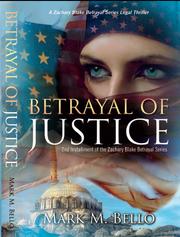 Ronald John won the U.S. presidency on the platform of ridding the country of a “Muslim scourge.” White supremacist Keith Blackwell fully supports the president and, believing it’s time for action, initiates a series of anti-Muslim crimes in Dearborn, including firebombing a mosque. Twenty-five-year-old Arya Khan has serious doubts about authorities’ devotion to finding the criminal, though a task force led by chief of detectives Jack Dylan locks onto a suspect. When Arya learns it’s Keith, she plans to bring him to justice only to inadvertently witness someone stab him to death. She calls 911 and hurries to Keith’s aid, but to police at the scene, the bloody woman looks like a prime suspect. Zack takes Arya’s case, and with evidence stacked against her, he’s convinced the only way out is to identify the actual killer. That turns out to be the most crucial issue, since the killer, presuming Arya saw him, wants to make certain she stays quiet—permanently. Bello’s novel is unmistakably topical. President John’s plan involves securing America’s borders from illegal immigrants. This further adds another layer to the already sympathetic Arya; her parents are just two of the numerous Muslims in danger of deportation. Notwithstanding a spotlight on the recurring protagonist, there’s apt coverage of the task force. Jack, who mocks Arya’s profession of innocence, may soon believe her, much like detective (and fellow Muslim) Shaheed Ali. Accordingly, there’s only a modicum of courtroom scenes, but Zack’s legal mindset evokes refreshingly blunt dialogue: he predicts that prosecutors and cops “will not want to admit that the terrorist in this case is the white guy.” The story’s baddies are blatantly villainous, Bello making it abundantly clear that bigotry is deplorable.

Commendable sophomore effort, even when the protagonist takes a back seat.

Can One Have Faith in Justice When Faith Itself is Corrupt?

Rolando Hayes panics as red and blue police lights flash behind his car. He glances at his wife, Sarah and asks: "What's the speed limit?" When the officer approaches the vehicle, Rolando, wanting no trouble, reveals that he legally carries a gun. Now, it is the officer's turn to panic. Inconsistent orders are given, confusion reigns and shots ring out. Suddenly, an innocent man lies bleeding to death in front of his family; the bloody aftermath is captured on dash cam and cell phone video for all to see. The shooting becomes the national headline. A community is thrown into an uproar. Protestors take to the streets. The dead man was black. The shooter is white. Was this a righteous shoot or the heinous actions of a racist cop? The officer is placed on administrative leave while a formal investigation is commenced. As Sarah struggles to make sense of a senseless tragedy, she decides to seek justice for her husband. She turns to high-powered attorney Zachary Blake. Zack and Sarah dare to challenge the status quo. Are they up to the challenge? Fighting city hall will not be easy. How far will the police go to defend the system? Can justice be born of injustice? Betrayal in Black is a ripped from the headlines thrill ride that explores issues of race, law enforcement, and the uneven scales of justice. Get 'Betrayed' once again...

“Cut off the head of the snake and another will grow in its place.”Attorney Zachary Blake returns with Police Captain Jack Dylan in this intense legal thriller.Dearborn, Michigan has enjoyed relative tranquility after beating white supremacists in the field and in the courtroom. However, a second group of dangerous bigots plots revenge for their fallen brothers. Their evil plan? To steal a cache of deadly Sarin Gas and release it in Dearborn.Jack Dylan and his team discover this terrorist plot and are set to diffuse it. At the last minute, the FBI usurps the investigation and achieves uncertain results. Furious with the FBI and operation's outcome, Jack defies orders, goes rogue and chases evil to the small, fishing town of Manistee. When his own plan goes awry, Dylan finds himself under arrest and on trial for murder. He calls on Zack Blake to defend him in the biggest trial the community has ever seen. The local cops and the FBI are hellbent on convicting Dylan, while Blake and his team seek proof that things are not as they appear. Can Zack pull off a courtroom miracle or will Jack fall victim to this Betrayal in Blue?
Published: Sept. 1, 2018
ISBN: 1732447101