Mark Pannebecker is an author of literary fiction and the founder of the St. Louis Indie Book Fair, an annual event created to foster authors of fiction and nonfiction. He started out as a filmmaker but soon fell in love with the creative writing process and began to shift his focus from producing and directing films to writing screenplays. He now writes in whichever genre holds the narrative best. He has written screenplays, stage plays, novels, novellas, and has recently published a collection of poetry titled Motorcycle Boy Lives (BookLocker, 2015) and a collection of short stories titled Godsfood (BookLocker, 2015). His first novel Fraternity of Fractures (AuthorHouse, 2016) was originally a screenplay.

Just over a decade ago, Mark Pannebecker started falling asleep when he lost his desire to write. Thinking it was just a nap, a writer’s block, he closed his eyes. But attempts to awaken and force himself out of his writer’s block failed. Months rolled into years where Mark wrote nothing yet still called himself a writer. The years languished over him as he slowly lost his dharma. And so, he slept, without a life purpose, following the dreams of others. Until a seemingly insignificant event occurred that awoke him. After all the yoga and Kirtans and meditation and breath-work and Chi Gong and getting in touch with his feminine and chanting and searching the metaphysical for answers and the soul-searching and the soul expansion and the embrace of the Goddesses, the Buddha, the Hindu gods—he awoke again to his raison d'être.

Mark is now in the process of preparing and writing new work, alive and fresh from a long slumber. The book he’s most excited about publishing is “A Fool’s Journey,” a 21-part series of novelettes inspired by The Fool and his journey through the Major Arcana of the Tarot. Each of the twenty-one parts will be launched as eBook only.

“Depressing at times but an emotionally charged story that animates its characters.”
– Kirkus Reviews 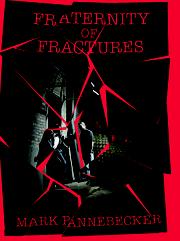 In Pannebecker’s (Godsfood, 2015) urban drama, the latest score for a trio of burglars is substantial, but a dangerous man who wants his money back may put them all in jeopardy.

Justin Sunder, a thief by trade, prides himself on being able to bypass any alarm system. He shares a St. Louis apartment with fellow cat burglar Phoenix. Justin loves Phoenix, but she doesn’t reciprocate, a fact made all the more glaring once love interest Dylan Panicosky enters the picture. The three pull B&Es together, yet jealousy ultimately threatens their union: Justin knows Dylan and Phoenix are having sex, while Dylan thinks there’s something more to the relationship between the other two. When they target coke dealer David’s place, they walk away with a cool $40,000. But David’s relentless search for the thieves who stole from him could lead the notoriously unhinged dealer right to any one of them. Pannebecker’s novel focuses more on the criminals than the crimes, providing readers with affable lawbreakers. The narrative distinguishes the thieves with individual motives for stealing: Justin, with his “twisted Robin Hood logic,” believes the rich are immoral; Phoenix finds the crimes sexually stimulating; and Dylan just seems to be following Phoenix. Their back stories are engrossing, too, especially Phoenix’s mom trying to push her into prostitution at 14 and Justin’s conspicuous burn scar, which the narrative doesn’t elucidate until near the end. The inevitable envy between the two men adds melodrama to the pages, though it also leads to significant turning points, including Justin’s resolve to quit stealing and leave St. Louis and a serious, albeit somewhat predictable, decision that Dylan makes late in the novel. David is an unmistakable menace for the protagonists; details of a horrendous act involving his mother are particularly unsettling. Pannebecker’s story, which takes place in the 1980s, also addresses social issues of the time. Justin’s friend Bernard, for example, is homosexual and subjected to intolerance and homophobic slurs. It’s hard to miss a sense of gloom throughout, but Pannebecker doesn’t let it saturate the novel. The protagonists always cling to hope, earning readers’ sympathy along the way.

Depressing at times but an emotionally charged story that animates its characters.

This collection of short stories is a tasty morsel that rests softly on the palate and an important part of every meal. Sometimes the stories leave a lump in the throat and other times a smile on the lips. From the haunted past of Sylvia in The Isle of Shoals to the lovable bear living in the big city in The Adventures of Sparky the Bear, GODSFOOD delivers a cornucopia of diverse writing and unique characters. Visit a white man in the Midwest struggling to keep his honor in The Curman Brothers, and a black man in L.A. during the 1992 riots displaying his in The Unhealing Wound. Walk with two lost souls in Maribella of the Moors, and one rediscovered soul in My Brother’s Garden. Listen in as a father tells his son a charming bedtime tale in The Hip O’ Cat, and as a spirit guide tells a young woman a transformative one in Salmon King. And don’t forget to plan for the afterlife buffet in Godsfood.
ISBN: 978-0-692-41095-0