Mark S. Osaki was born in Sacramento, California. He attended the University of California, Berkeley as an Alumni Scholar and went on to do graduate work in International Relations and Security Studies. His work has appeared in various journals and anthologies, including: The Georgia Review, Carrying the Darkness—The Poetry of the Vietnam War (Avon, Texas Tech University Press), South Carolina Review, Men of Our Time—An Anthology of Male Poetry in Contemporary America (University of Georgia Press), Breaking Silence—An Anthology of Contemporary Asian American Poets (Greenfield Review Press), Onset Review and Báo Gi?y—Vietnamese Poetry. Mark has received awards for his poetry from the Academy of American Poets, University of California at Berkeley, San Francisco Arts Commission, Seattle Arts Council and the National Endowment for the Arts. 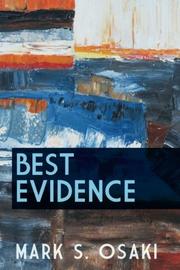 A debut volume of poetry explores love and war.

Divided into four sections, Osaki’s book covers vast emotional territories. Section 1, entitled “Walking Back the Cat,” is a reflection on youthful relationships both familial and romantic. “Dying Arts,” the second part, is an examination of war and its brutal consequences. But sections three and four, named “Tradecraft” and “Best Evidence” respectively, do not appear to group poems by theme. The collection opens with “My Father Holding Squash,” one of Osaki’s strongest poems. It introduces the poet’s preoccupation with ephemera—particularly old photographs and letters. Here he describes a photo that is “several years old” of his father in his garden. Osaki muses that an invisible caption reads: “Look at this, you poetry-writing / jackass. Not everything I raise is useless!” The squash is described as “bearable fruit,” wryly hinting that the poet son is considered somewhat less bearable in his father’s eyes. Again, in the poem “Photograph,” Osaki is at his best, sensuously describing a shot of a young woman and the fleeting nature of that moment spent with her: “I know only that I was with her / in a room years ago, and that the sun filtering / into that room faded instantly upon striking the floor.” Wistful nostalgia gives way to violence in “Dying Arts.” Poems such as “Preserve” present a battleground dystopia: “Upturned graves and craters / to swim in when it rains. / Small children shake skulls / like rattles, while older ones carve rifles / out of bone.” Meanwhile, “Silver Star” considers the act of escorting the coffin of a dead soldier home, and “Gun Song” ruminates on owning a weapon to protect against home invasion. The language is more jagged here but powerfully unsettling nonetheless. The collection boasts a range of promising poetic voices, but they do not speak to one another, a common pitfall found in debuts. “Walking Back the Cat” is outstanding in its refined attention to detail; the sections following it read as though they have been produced by two or more other poets. Nevertheless, this is thoughtful, timely writing that demands further attention.

A poignant collection by a talented poet still in search of one defining voice.

Do not argue with an idiot. He will drag you down to his level and beat you with experience

Men of Our Time