Born in Tacoma, Washington, “The City of Destiny,” Marla was destined to move to Los Angeles where she shoots her arrow of love on a daily basis as a professional matchmaker, helping countless couples connect with their soul mates.

She is the author of three memoirs, Diary of a Beverly Hills Matchmaker, Hearts on the Line & The Buddha Made Me Do It. Marla has been interviewed on the Today Show, WGN Chicago Morning News, San Diego Living, Urban Rush, CTV Calgary, Better TV, KUSI San Diego Morning Show, and over 100 radio shows including Coast to Coast AM with George Noory.

Her husband Adolfo has asked her, “Marlita, do you want to go to the moon too?” referring to her many interests—a true Gemini. Yet nothing has fascinated her like her profound adventure far beyond the moon and into the vastness of cosmic spirituality. 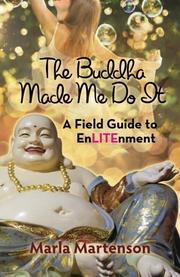 The Buddha Made Me Do It

An antic memoir about a woman exploring the byways of New Age spiritualism.

The long string of problems and bizarre encounters in Martenson’s (Diary of a Beverly Hills Matchmaker, 2014) autobiography begins when, while clearing her Los Angeles house of “SICLW” (or “Shit I Can Live Without”), she made the impulsive decision to throw out a small Buddha statue treasured by her husband, Adolfo. The housecleaning was part of a spiritual journey she was taking with her friend Julie and held special appeal to Martenson as a kind of psychic counterweight to her job as a “successful, well-known, high-end matchmaker for affluent men.” Her quest met with steady resistance from her husband, who succinctly urged her to lay off the New Age stuff, but it also got an enormous energy boost from her visits to a place called the “Imagine Center”; there, she met a teacher known as “Goddess Tauheedah,” who tutored Martenson and Julie in the ways of the mystical world. Along the way (and accompanied most of the time by Adolfo’s irascible skepticism), the author digresses on dozens of side topics, from adventures in astral projection to the idea of a lurking order of Reptilians bent on world domination. The book has some serious didactic aims about spirituality and detoxification: “Though not all psychics and mediums are vegan or even vegetarian, for me, it is a package deal,” she writes at one point, “It’s about consciousness.” There’s even an appendix with wholesome recipes. However, its main attractions are very much grounded in Martenson’s zany everyday life and her unfailing, infectious happiness in describing it. As a result, her stories will make readers laugh, regardless of where they stand with the Buddha.

Hearts On The Line: the elusive pursuit of love in the city of angels : Readers’ Favorite, 2013

Hearts On The Line: the elusive pursuit of love in the city of angels : Paris Book Festival, 2013

Diary of a Beverly Hills Matchmaker

In Diary of a Beverly Hills Matchmaker, Marla takes her readers for a hilarious romp through her days as an L.A. matchmaker and her daily struggles to keep her self-esteem from imploding in a town where looks are everything and money talks. From juggling the demands of an insensitive boss… to the ups and downs of her own marriage to a Latin husband who doesn’t think that she is “domestic” enough, Marla writes with charm and self-effacement about the universal struggles that all women face in their lives. Readers will laugh, cringe and cry as they journey with her through outrageous stories about the indignities of dating in Los Angeles, dealing with overblown egos, vicariously hobnobbing with celebrities, and navigating the wannabe-land of Beverly Hills. In a city where perfection is almost a prerequisite, even Marla can’t help but run for the Botox every once in a while.
Published: Aug. 24, 2014
ISBN: 0692266801

Hearts On The Line: the elusive pursuit of love in the city of angels

Now in her second installment, Marla is still firing Cupid darts at work, a plush dating service she calls the “Double D”—which doesn’t stand for dream date. She and her husband Adolfo work hard to achieve their goal of leaving their small apartment behind and buying a home, but with a boss who requires Marla to cross ethical lines, a tiny spark is all it takes, and Marla goes from being vice-president of a multi-city enterprise to unemployment. Adolfo’s passion switches to anger and then resentment, Marla’s celebrity hob-knobbing, shopping in boutiques, and pricey Botox habit all skid to a dead stop. Bills pile up. Determined, Marla turns to Craig’s list, connecting with a series of flaky employers, and if the 99 Cent Store doesn’t carry it, she doesn’t buy it. Broke and depressed, however, she rarely finds time to write. When a former client calls and asks if she’d work with him as a matchmaker privately, she shifts into a whole new level. Amazing things start happening. Not only does she help people find soul mates instead of trophies and sugar-daddies, she finds the emotional space to heal personal traumas in the past, ranging from the bullying she endured in her youth, a near rape, a disastrous previous marriage, and her father’s death—an unusual experience involving the ocean’s kiss. Marla writes as never before. Adolfo is proud of her, but Marla still holds grudges as they search for a new home. She decides to rekindle the flame in her marriage and thinks she knows just the person to help: Chantal, a former client who owns a spa specializing in Brazilian hot waxes. This proves to be a hilarious blend of torture, comedy, and high hopes—a bit like life itself. Along with her clients, Marla’s heart is on the line as she discovers the powerful ways in which dreams are real.