Marnie Sluman Somers, co-author, editor and publisher of The Amulet

My late mother, Norma Sluman, was a talented Canadian author. During her lifetime, she wrote two novels of historical fiction (Blackfoot Crossing and Poundmaker, and co-authored with Jean Cuthand Goodwill, a biography (John Tootoosis, a Biography of A Cree Leader.

Before she passed, Mom sent me her draft manuscript for The Amulet, labouriously written on a manual typewriter. She had asked me to use my computer to retype it into digital format to meet the current expectations of traditional publishers.

I read this manuscript in it`s first-draft form, and I thought back then it was a good book. But I didn`t make the time to get the job done for her. After Mom passed, I felt quite disappointed in myself – that I had let her down – an important story based, on a historically significant Canadian incident, was now destined for obscurity.

Years later, the light finally dawned that it was not too late to do something about it – if I would just commit myself to the effort. In 2014, I began the task of copy-typing her manuscript into digital format. As the chapters began to emerge, I found, as a writer myself, that I just could not resist the urge to tinker with Mom`s draft. The story is still very much hers. I have just burnished some of her style. I can only trust my intuition that she would approve of this mother-daughter iteration.

What I didn`t know when I started, was that The Amulet would become more than just a project, it morphed into a journey to truly appreciating my mother as an author. Growing up, I thought I understood the effort she put into her writing and her meticulous dedication to research. But I did not. My Mom created art in a technologically primitive environment – before the advent of computers, dedicated writing software and the incomparable Internet – all taken for granted today. My recent technology-supported efforts pale in comparison to Mom`s decades of “old school” writing.

For my part, I truly found joy in bringing this important story to life in 2018, to honour my mother`s writing talent, her passion for historical accuracy, and her wish to shed light on the biases and mistakes of our past. It was her mission to educate and inform the political decision-makers, today and into our future. I trust that she would approve of this mother-daughter reiteration of her last novel.

Marnie Sluman Somers was born in Toronto and moved with her parents when she was two-years-old to Calgary where her father, Ken Sluman, played football for the Calgary Stampeders and later the Edmonton Eskimos. After her father retired from his ten-year football career, the family moved back to Toronto where Marnie attended Kew Beach Public School and Malvern Collegiate Institute in Toronto’s Beach District. She moved to Winnipeg at age twenty and has lived in rural Manitoba since then. Somers had a long career working in both the private and public sectors, during which she honed her own writing skills. Somers became a full-time freelance writer in 1997 creating news releases, magazine feature articles and marketing content published in agricultural magazines and newspapers throughout North American. She currently lives on an acreage near Carberry, Manitoba with her partner Wilf”. 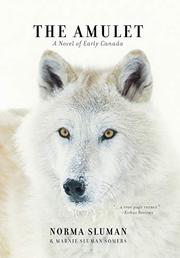 A trader takes his young bride into the perilous Canadian wilderness in this historical romance.

It is the summer of 1884 in the District of Saskatchewan in the Northwest Territories of Canada. Ian McNab, a trader and “granite-jawed” Scot, has taken a wife, to the surprise of all who know him. The beautiful Catherine looks about half McNab’s age and has the power to beguile every man who sets eyes on her. A born loner, McNab requested Catherine’s hand in marriage during their first encounter when visiting his father in southern Ontario. Now he finds himself returning with her to his trading post at the remote Pounding Lake, where he knows she will be utterly out of place. Before even arriving, their relationship is fraught—McNab is rough and impatient with her during lovemaking and considers her an “utter disappointment in bed.” And Pounding Lake is a troubled community surrounded by Native American reserves. Relations with the local Cree are becoming increasingly volatile. The strains are compounded when an already bitter winter worsens. Meanwhile, Catherine is introduced to the dashing Jay Clear Sky, a Cree interpreter who, fearing for her safety, gives her a protection amulet. The first draft of this tale was written by Sluman (Poundmaker, 1967, etc.). It was then rescued from obscurity by her daughter, debut author Somers, who “could not resist the urge to tweak” the story a number of years after her mother’s death. Closely based on the Northwest Uprising of 1885, this book, although a work of fiction, has a strong historical foundation. The engrossing narrative has everything required for a successful historical romance: a strong-willed heroine, a mysterious and forbidden love interest, and a viper’s nest of villains who eye Catherine lasciviously. The tension rises incrementally as the tale progresses, making for a true page-turner. But despite the growing sense of unease, there is also a fastidious attention to detail regarding the beauty of the Canadian wilderness: “She could see the water leaping and flashing, blue-green under the bright sunlight, free at last of the ice and debris that had choked it during the spring runoff.” Some readers may find the developing romance cloying, if unpredictable, but fans of Diana Gabaldon’s Outlander series will discover a comparable treat here.

A love story that remains gripping until the very last page.