Martin Ben is an artist working in Central Virginia. He lives with his wife and daughter. There Is Only One is his third publication.

Chris Johnston is a Kriyaban and truck driver in Central Virginia where he lives with his wife and son.

There Is Only One is co-authored by Chris Johnston and Martin Ben. 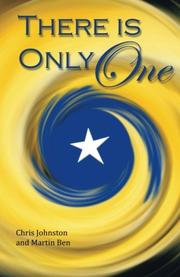 THERE IS ONLY ONE

A short tale about a man whose life is changed by a mysterious encounter at the foot of a mountain.

Joseph, the narrator of this short novella by Johnston and Ben, is sitting atop a mountain when he’s struck by a series of sudden realizations: life is short; the meaning of existence, murky; the universe can often seem unfair (“What was fair about someone living ninety years and having a great life, while someone else died early from childhood cancer?”); and he’s been ignoring all of these concerns too long. He feels a new clarity as he hikes back down the mountain, but alarming physical symptoms quickly overtake him. He’s feeling terrible when he reaches the bottom and encounters a stranger who calmly informs him he’s having a heart attack but also reassures him: “Everything happens for a reason and everything will work out.” His friends and girlfriend rally around him, and although he’s initially depressed, he survives. When he’s recovered enough to return to the mountain, Joseph seeks out the mysterious stranger in hopes of gaining insights he’s sure the man possesses. And he’s not wrong. He meets the same man, and for the remainder of the novella, the stranger teaches him about meditation, reincarnation (“Creation is precise….If you shoot and kill someone, you will be shot and killed”), and the true nature of Christianity. Their eventual parting is calm but final, and Joseph is left to ponder everything he’s learned and come to some fundamental breakthroughs of his own (he realizes that “knowing God and deepening your relationship with Him is all that matters”). The combination of Christianity and Eastern mysticism that Johnston and Ben present here is intriguing though somewhat underdeveloped; Joseph never experiences any serious doubts about the stranger, and the stranger never hints as to why Joseph would be singled out for such an extraordinary visitation. Both Joseph and his mysterious instructor have a tendency to talk in clichés, and despite his assurances to the contrary, Joseph isn’t radically changed by his supernatural experiences. The story’s pace, however, is quick enough to keep many readers’ interest.

A lightweight but feel-good parable for fans of angel-encounter stories.

A New Time is a grouping of short stories and vignettes in the style of Hemingway's In Our Time. It is an image of the world, from different perspectives all over the globe. It is the story of revolutionary leaders, disruption and adjustment, unconditional love, and the introduction of the Kan world family. It is epic and entertaining, simple and highly sophisticated. It is a greatly anticipated read that leaves the reader with a lasting satisfaction that is long overdue. For the Earth.
Published: Feb. 8, 2012

I love you. My gift is freedom from the reality created, and freedom to create your own. Here the key to release mystery of all time. For the Earth, All Ways. This is the book of Kan. The Kan family is the world community that perceives the separation between All to be the illusion of existence All of one differentiated for the purpose of Experience. Separation is the illusion. In Unity we are All.