The son of a career air force officer, Marty Steere grew up on or near military installations across the country and overseas before settling in Southern California, where, when he’s not writing, he practices law. His first novel, the non-stop thriller, Sea of Crises, was awarded a starred review by Kirkus and was named to Kirkus Reviews' Best of 2012. His latest novel, Defiant Heart, is a heartwarming story of perseverance in the face of hardship. Set against the backdrop of a small Midwestern town on the eve of World War II, it features two extraordinary characters and one unforgettable love story. 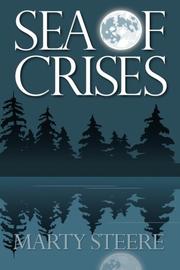 Debut author Steere shows off his air-and-space mastery in this swashbuckling tale of Apollo 18, the moon landing that never was.

In Steere’s version of 1976, astronauts Bob Cartwright, Mason Gale and Steve Dayton head toward the moon to explore the lunar feature known as Mare Crisium, but the landing team of Cartwright and Gale discovers something out of place. Water? Aliens? A black monolith? The world never finds out, since the crew isn’t heard from or seen again until their capsule, a charred wreck containing three crisp corpses, plunges into the Pacific. Thirty years later, Nate, Peter and Matt—the sons of mission commander Cartwright—find themselves tangled in the investigation of what really happened. Peter, a journalist, starts it all by ferreting out NASA documents and questioning Gale’s surviving relatives in Minnesota. Now he’s being followed. Oldest brother Nate, a crack legal consultant, comes to the rescue in LA by using his organizational skills to execute evasive maneuvers against bad guys who send impolite warnings in the form of animal carcasses. The two escape to Idaho in search of Matt, Peter’s twin, who was once attached to an off-the-grid military-intelligence unit known as the Organization. Things get devilishly complicated, conspiratorial and dangerous as the brothers are pushed toward the Atlantic coast amid a series of revelations in the form of flashbacks to the lunar sea. Steere’s high-octane suspense tale takes off with all the intrigue and honor of the best Space-Age Westerns and political thrillers. Good guys, bad guys, damsels in distress, secret tunnels, sexy aircraft, heavy ordnance and gadgets galore are set handsomely by Steere’s deft renderings. A bit of melodrama and some boilerplate dialogue don’t derail this solidly built module whose commanding verisimilitude will enthrall space and tech enthusiasts as well as anyone ready for adventure.

A stellar thriller that handily juggles its formulaic elements to achieve near-perfect liftoff.

Two extraordinary characters. One unforgettable love story. In the spring of 1941, young Jon Meyer’s family dies in a tragic accident, and he is sent to live in a small Indiana town. He arrives to find himself unwanted and shunned. Mary Dahlgren is the mayor’s daughter. A pretty girl, she could have the pick of the boys in town, including Vernon King, the star of the vaunted high school basketball team. To the chagrin of her friends, though, Mary has always been more interested in books than boys. That is, until she meets Jon. But Jon and Mary are kept apart through the efforts of Mary’s father, who perceives their relationship a threat to his political aspirations, and Vernon, to whom Jon is a rival for Mary’s affections. For months Jon is subjected to a painful ostracism. Then, just when the young man’s earnestness and perseverance begin to win over many of the townsfolk and it appears that love may conquer all, tragedy strikes. As the country is caught up in war, so too are the young lovers swept up in events beyond their control, leaving both fighting for their very lives. If, against the odds, they are to be together, each will need to find the strength, the courage and the resourcefulness that beat only in a defiant heart.
Published: April 4, 2013
ISBN: 9780985401443