Mother of three, grandmother to six Millennials, a voracious reader who enjoys family sagas, in particular, but who can keep turning pages until the wee hours reading crime novels and mysteries. Perhaps that's due to coming to writing late after being an elementary school teacher, working as an insurance agent, owning an interior design business for almost twenty years, and owning two restaurants; a fast food and the last one, an English Tea Room. Maybe she should just say..."Hand me a book. Any book will do." She likes them all. Her penchant for variety might be why one can dig through Ms. Abbott's laptop files and discover a slew of picture book manuscripts, middle-grade tales, a Young Adult three-book series about a private school headmistress (an evil witch in disguise) who kidnaps select students and then forces them into her coven, plus a few other adult novels. Who doesn't want to know more about one family's struggle during the "dirty thirties' Dust Bowl" (based upon her own grandmother's life)? And why does Walter the rabbit stack waffles between his ears? Can Snoogle find a home where he fits in? And believe it or not, Merlin thinks humans don't need magic. So whether her protagonists are real or fantasy, or animals that talk, Ms. Abbott spins her Fantastical Ferris Wheel of Stories and lets her mind wander. Where she stops the big wheel and writes is nobody's guess. She simply wants readers to come along for the ride.

“An often moving story about the corrosive power of shame.”
– Kirkus Reviews 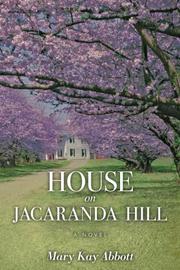 In Abbott’s (Pearl of Baxter Grove, 2009, etc.) novel set in the 1950s, a 16-year-old girl discovers a diary and becomes obsessed with deciphering a cryptic entry within it.

Emma Lankersham grew up on the Murphy Manor in Oklahoma, as her father, Jack, was the property’s foreman, employed by Geraldine Murphy, the estate’s owner. Emma stumbles upon a diary in the loft of a barn, and in it, she discovers an enigmatic lament about a motherless infant. Emma has no idea to whom the diary belongs or to whom the entry refers, but she’s intent on finding out. Later, she discovers another clue—a cookie cutter with a tag that has the name “Gwendolyn” inscribed on it. She has no recollection of anyone ever mentioning that name in the house, and everyone whom she asks about it stonewalls her. The reader quickly learns that Geraldine’s husband, J.T., a wildly successful businessman, was also a horrid man and philanderer, and that their union was a fraught and loveless one. Meanwhile, Emma falls in love with Hank Thompson, Geraldine’s grandson, but Geraldine forbids any relationship between them due to the insuperability of their class divide and the embarrassment of having to explain Emma’s congenital disfigurement, affecting two toes on her left foot. Geraldine treats her staff, some of whom are descendants of slaves, with savage disregard—a despotism caused in part by her own suffering and the weight of the secrets she bears. Macie Mae, a servant who grew up on the estate and Emma’s best friend, bears Geraldine’s venom with equanimity, although she knows more about Murphy Manor’s past than she’s willing to share. The author intelligently captures the precarious position of African-American laborers in the mid-20th century, who were legally free but limited by white people’s prejudices and their own poverty. The writing is clear and sometimes powerful, and the characters, particularly Macie Mae, are deeply developed. Abbott also deftly depicts the social significance of reputation, which could be of extraordinary utility to women of the time but could also be used as a weapon against them. The author tells the story from an omniscient, third-person perspective, and reveals early on that the house is haunted by two scandalous secrets, both of which Geraldine zealously protects. However, these two secrets soon become a source of tedium, due to seemingly incessant references to them; the power of the mystery is only diminished by the relentless discussion of it. Further, the transformation of Geraldine’s character, late in the novel, happens too fast and too completely to be plausible. Hank, meanwhile, is depicted as weak and entitled, which makes it difficult to understand why Emma falls for him. Still, despite these flaws, this remains an emotionally affecting tale overall. Emma is a beautifully drawn character, humbled by her disability but not without pride. She hunts for the truth, regardless of the consequences—some of which prove to be a heavy weight on her shoulders.

An often moving story about the corrosive power of shame.

Wendell is the class bully and Frankie comes up with a way to stop him from poking him. Too bad he becomes the class clown when he wraps himself in Bubble Wrap.
ISBN: 1-892421-91-7

Casey is beside herself when her mother dies in a terrible car accident, but needs a mom badly. In their small mountain town of Baxter Grove there are only two prospects: the cantankerous store-owner or the newcomer who is tall and scary. And black.
ISBN: 9781439213445