You want to know about Mary? In the simplest terms, she’s a Southern Novelist and author of 2 novels (the third on the way). Mary Morony is one of six children. She was born and raised in Charlottesville, Virginia, mainly by her family’s black maid. It was a time and place of segregated schools and water fountains, as well as restaurants and movie theaters that prohibited black customers. Morony’s inspiration for Apron Strings was her relationship with her family’s maid, who taught her love and acceptance with warmth, humor, and unending patience.

Morony became a mother of four children and then earned a Bachelor of Arts in English (concentration in creative writing) at the University of Virginia when she was in her forties. She currently lives on a farm in Orange County, Virginia, just Northeast of Charlottesville with her husband nearly 30 years, Ralph, 2 Great Danes, and 2 guinea hens.

About Mary – Reality and Fiction

Morony’s rich characters are drawn from her childhood memories and lifelong experiences. Growing up where several important people in her life had issues with alcohol, her parents split up in a time when divorce was a humiliating family secret. Morony had a lot of material to work with.

By the time Morony was 35, she had been married four times. Divorced, widowed and the mother of four children, she has experienced more in her life than most people would in five lives. It has been said that “A life of tragedy and pain has bred a writer full of wit and compassion” in Mary Morony. As her characters grow and learn, she teaches lessons gleaned from her own experiences.

Telling stories, Morony says, became her lifeline for survival over a lifetime. With alcoholism and bipolar disorder in her family, with deaths and divorces, and children of her own to raise and educate, she says, “I have lived a life chock full of stories, and I do mean chock full.” Mary’s husband Ralph, of now almost 30 years, came into her life from Ireland – “I had to import him!” she jokes – between marriages. Like the four children he helped raise – three from her earlier marriages – and their menagerie of dogs, he is well acquainted with her relentless sense of humor – even if, she points out, she may be the only one laughing. A sense of humor, however, actually seems to be a shared family trait, since even after decades together, he still makes her laugh – “that is, when I don’t want to dismember him for some reason or another.

Mary Morony is an author who writes about tragedy from the inside and guides her readers through it to compassion, humor and recovery. She brings Southern charm, irreverence and wit to bear against subjects as vast as racism and as personal as alcoholism; always with a heart and soul that makes her work undeniably appealing. 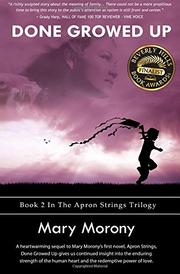 In this second installment of a historical fiction trilogy, a couple’s divorce results in repercussions for all the members of the Mackey family in 1963 Virginia.

Twelve-year-old Sallee Mackey is coping well since her parents Joe and Ginny split up, in part because she’s fond of her dad’s new friend, Linda. But little sister Helen’s too nervous to even discuss their father’s place while at home with Ginny, and older brother Gordy has turned into a perpetually angry teen. Stuart, however, the oldest of the three girls, initially living with Joe, is ready to leave Charlottesville behind for a New York City college, particularly when she thinks Joe’s getting married—not to Linda, but to Rosemary. Ginny’s drinking, meanwhile, is getting out of hand, and she earns Sallee’s wrath after she insults Linda, prompting the girl to try some profanity (really just one word, but the worst one), courtesy of her older sister. When Sallee’s hospitalized with a serious illness, Ginny works at controlling her alcoholism, but problems for the Mackeys unfortunately continue. Gordy, not keen to the possibility of moving to another home, runs away, and Joe, in New York to check on Stuart’s academic probation, discovers something much worse going on with his daughter. Joe eventually realizes he’s still in love with Ginny, but she may not so willingly take him back. As in Morony’s (Apron Strings, 2014) previous novel, maid Ethel is the family’s glue. The kids sometimes seem more worried about hurting her than their mom, while endearing Ethel readily provides love and endless hugs. Even her husband, Early, contributes, making an attempt to set Gordy straight. Delving into Joe and Ginny’s troubled lives eases the story’s tension, especially because they’re largely at fault for the Mackeys’ turmoil. Joe’s father, for one, was a heroin addict, and Ginny learns an unsettling fact about her background that she may want to keep secret. Morony adeptly handles the various perspectives, making it difficult to specify a protagonist, and the title, though playful, can apply to more than one character. The author likewise teases events from her earlier tale without echoing said narrative, which will surely appeal both to series newbies and returnees.

A profound family melodrama that’s surprisingly upbeat, thanks to the always reliable maid. 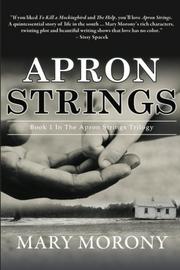 A white Virginian family in the late 1950s struggles to stay together while enduring a failing marriage and racist neighbors in Morony’s debut historical drama.

For the Mackey family, 1957 changed everything, at least according to 7-year-old Sallee. The young narrator tells the story of her parents, Joe and Ginny; sisters Stuart and Helen; brother Gordy; and their maid, Ethel, a black woman who first worked for Ginny when they were both barely teenagers. Recent events take a toll on the family—nails are left in the driveway, possibly by someone opposed to the shopping center that Joe is overseeing; the kids become more aware of racial slurs from neighbors and a country still racially segregated (a “No coloreds allowed” comment nearly ruins a day at the movies with Ethel); and Joe and Ginny find their relationship severely strained. Even Ethel, the rock of the family who raised the kids as her own, is troubled, and a devastating experience has the homestead’s dependable, maternal maid “nipping at the gin” far too often. The novel grows dark and depressing, but because it’s shown through the eyes of Sallee, it maintains a naiveté and innocence. Ethel takes over as narrator for a few chapters, mostly to provide Sallee with some family history on her mother’s side, but she does tell about meeting her future husband, Early, and why the children are so important to her. There’s little violence and only a modicum of cursing, but Morony writes in a candid voice, refusing to sugarcoat the overt racism and making it clear that a small family in Virginia won’t change the bullheaded beliefs of others. Readers will be glad that they’ve stuck around for the bittersweet ending.

Even at its dourest, maintains a remarkable degree of refinement and Southern charm.