Four years ago, the novel was originally a spec idea for a TV series. But after getting several negative responses, like “female character is too strong, people won’t like her,” and “the male character isn’t strong enough…” Matthew was told that if he was willing to make the female character softer and more vulnerable, and the male character more “macho” and stronger, it might be picked up. Matthew refused to make those changes and decided to turn the spec idea into the book it is now, in the belief that people want more realistic, less stereotypical characters. The resulting novel has achieved that goal.
Matthew started his entertainment career not as an author, but as a filmmaker and producer. In his short time in the film industry, he has become known for his unique ability to guide the creative process and improve a film’s longevity and visual impact; he’s been involved in over 13 films and written this novel; he has also been nominated for a 2018 NW Regional Emmy. You can see his film history on IMDb under Matthew D. Hunt. 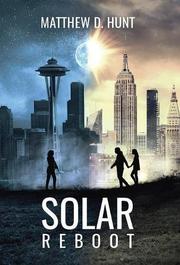 In Hunt’s debut thriller, a forest ranger races across the United States with his daughter to reunite with his wife after a solar flare wreaks havoc worldwide.

Alex Robinson is a disaster “prepper” who’s often worried about riots, food shortages, or mad cow disease, so news reports of an unusually large solar flare have him on edge. After his preteen daughter Piper’s out-of-state swim meet in New York City, he wants to forgo sightseeing and quickly get home to his wife (and Piper’s mother), Cameron, in Seattle. But before he and his daughter can leave, there’s a statewide power outage, and it turns out that other parts of the country are facing the same problem. Alex opts to hit the road with Piper, which proves to be an arduous undertaking involving shoddy cellphone service, raging storms, and even falling planes. In the meantime, former Army medic and current emergency room nurse Cameron takes refuge at the family’s cabin in the mountains of Washington state. The relatively small cabin community, however, isn’t immune to unrest, and she and her friend Wade, who also served in the Army, try to maintain order. Meanwhile, she hopes that her family members make it home or, at least, find a way to communicate with her. Hunt’s narrative is epic in scope, but he aptly zeroes in on his main characters to tell the story. Readers don’t know any more about the ongoing catastrophes than the Robinsons do, although one scientific explanation is offered—as a minor character’s conjecture. Hunt further elevates the suspense by adding personal obstacles (diabetic Piper needs insulin, for example) and character flaws (Alex must overcome his trust issues). It’s familiar terrain; as in other disaster or apocalyptic novels, people—including car thieves and trigger-happy survivors—are invariably worse than the calamity they face. But the author delivers it all in easygoing, steadily paced prose, resulting in an ending that thoroughly wraps things up—although a sequel would be feasible.

This tale’s sharp focus on imperfect but appealing characters sets it apart from standard genre fare.

Always listen to experts. They'll tell you what can't be done, and why. Then do it. -Robert A. Heinlein