Matt Lieberman was born and raised in New Haven and educated at Yale College and Yale Law School. The first part of his career was in education as a high school English teacher and then administrator. Since then he has been an entrepreneur. He has two daughters and lives in Atlanta on the Chattahoochee River. Lucius is his first novel.

“A deeply original meditation on race and friendship....A startling look at race relations in the American South.”
– Kirkus Reviews 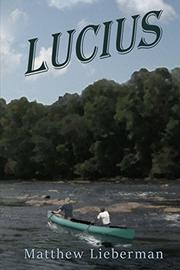 A very old, white Southern man recounts a fantastical story about his life with a slave companion in this debut novel.

Fifty-year-old Mordecai “Tree” Weissman lives in Atlanta, not far from a river where Confederate and Union soldiers battled during the Civil War. While volunteering at the Jewish Home for the Elderly, he meets an eccentric Southern gentleman, Benno Johnson, who grew up in Atlanta. Benno, a charming raconteur, regales Mordecai with stories of his youth—which include tales of his slave, Lucius Cincinnatus Jones. Mordecai is understandably incredulous, as it’s currently 2017. He asks the home’s resident psychiatrist, Dr. McBurney, about it, and he can’t conclusively rule out the possibility that Benno’s stories are true. Author Lieberman devotes the bulk of his extraordinarily imaginative debut novel to Benno’s anecdotal account of his life with Lucius (and the strange manner of Lucius’ death). It soon comes to light that Benno is only about 90 years old and spent nearly his entire life with Lucius, who died about three years before. When Benno’s account gets into the details of Lucius’ death, it becomes even more peculiar, but also more engrossing. He says that Lucius once fled an angry Ku Klux Klan rally into a swamp, where he was able to communicate with animals and had a particularly lively exchange with two frogs. Mordecai soon notices that Benno only ever talks of Lucius in the terms of friendship and love: “He’d say things, and you would hear them, and you wouldn’t know who you were supposed to be rooting for. You wouldn’t know if he and Lucius were on the same side, the same team, or whether that was a morally perverse thought, practically implausible, and shameful to have even thought.”  In the end, Lieberman leaves it tantalizingly unsettled as to just how much of Benno’s remembrance is real and how much is apocryphal. Although Benno’s autobiography seems like fabulist insanity on its face, he delivers it all with placid self-assurance, and Mordecai is a perfectly drawn straight man for the old man’s wild tales. The younger man predictably disbelieves them, but he also gets pulled deeply into the narrative, hungry to hear more. Throughout, Lieberman’s prose is confidently informal and anecdotally intimate in a way that courts the reader’s trust. The way that he presents Benno’s story, readers will likely share Mordecai’s discomfort with it, as the old man’s telling seems tainted by the stain of racism. Some may also be uncomfortable with the fact that this anti-slavery novel attempts to offer a morally nuanced account, thinking that it whitewashes the gruesomeness of bondage. However, the book is a deeply original meditation on race and friendship. It’s impossible to gainsay Benno’s devotion to Lucius, and their loving camaraderie does raise provocative questions about the nature of devotion. This inaugural effort is rather brief—short enough to be considered a novella—which makes its artistic and philosophic depth all the more impressive.

A startling look at race relations in the American South.