Michael Beiriger, a novelist based in Idaho, is pleased to debut 'Scenes From the Siege of Doblina,' a four-volume series about the saga of a small Polish town suffering a five year Nazi occupation during WWII . The story, based on real events, illustrates how the townspeople labor desperately to keep hope alive, even as the Germans re-double their efforts to crush them. Beiriger has written seven novels, all in the historical fiction vein. He holds degrees in journalism and film production, and was a sound engineer based in Los Angeles for decades before moving to Idaho. His extensive work in the recording studios, clubs, and arenas of the rock music business provided background and inspiration for his first novel, a 'What if?' tale about Charles Manson and his musical ambitions.
Beiriger is the recipient of five gold record awards and two television Emmy awards. He spent his college years playing music and paying attention. 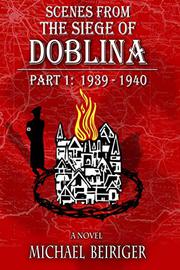 SCENES FROM THE SIEGE OF DOBLINA

Beiriger (GTO Road, 2017, etc.) imagines the wartime experiences of the inhabitants of a fictional Nazi-occupied Polish town in this first historical novel in a series.

In September 1939, Poland is in a state of emergency as its military falls before the invading German army. The citizens of Doblina can do nothing but watch as retreating soldiers and refugees flood their streets, attempting to escape the coming occupation. Dr. Stefan Brokowski has survived a brief war and returned home to run Doblina Regional Hospital and prepare for the worst. Saul Penzik, a refugee from Krakow whose family is dead, hopes that Doblina will be spared the fate of the larger cities: “He had no idea how far east the Germans would push, but thought: Perhaps this little town will be overlooked and bypassed.” However, the Germans soon appear outside of town, and city leaders negotiate a surrender. No one is sure what will happen, but everyone—most of all, the town’s Jewish community—is close to panic. As the occupation begins, Doblina’s citizens—Christians and Jews, farmers and landlords, wagoners and department store owners, patriots and collaborators—settle in and attempt to survive the coming ravages of the Third Reich. Beiriger adopts a diffuse, sprawling narrative strategy, juggling many characters and perspectives. His prose fluctuates from close alignment with the fears and suffering of townsfolk to moments of detached, even ironical, description of the surreal regime that descends on Doblina: “On a perfect spring morning blessed with bright white clouds floating through a cold blue sky, the trapdoor of the gallows erected in the town square let go and the body of Mrs. Stana Olzac dropped until the rope snapped rigid.” The scope of the project is immense—this is only the first of four books chronicling the town’s wartime happenings, and it’s more than 480 pages in length—and yet the scale feels somehow appropriate given Poland’s history. Beiriger manages not only to put human faces on these dark events, but also to explore, in exacting detail, how a community continuously evolves under escalating pressure.

An ambitious and affecting novel of World War II–era Poland.

GTO Road is a gritty action tale about a collision between potent muscle cars, speed-demon drivers, and violent drug dealers in 1973 California.

Young Cole Lawson has the Scroll - the lost key to ending the interminable separation of a desperate, ancient Egyptian King from his beloved family. He does not know its power - and so begins a fierce struggle to keep his friends , and then himself, from evil's harm.

What if . . .? What if Charles Manson, cult leader and aspiring rock musician, had escaped suspicion for the gruesome Cielo Drive murders in 1969 Los Angeles? Some major players in the LA rock scene had already been interested in his talents. So . . . Manson as pop star? "Beiriger has a real eye for detail and invokes a sinister,lurking fear that feels right when talking about the end of the '60's, a very witchy California dreaming." Adam Easterbrook, Shindig Magazine
ISBN: 978-1481055888