Michael J. Canzoniero, PhD, a licensed psychologist, was born in the Bronx where his pablum was New York Yankee statistics. His first heroes were the legendary Bronx Bombers: Ruth, Gehrig, and DiMaggio. As a young child he devoured anything and everything written about them, especially anything penned about Babe Ruth. As a teenager all he cared about was the daily "stats" of Mantle, Berra, and Ford. He fantasized about one day playing in Yankee pinstripes. Alas, he never got to play in Yankee Stadium, the "House that Ruth built". Some would say he was not good enough. He likes to think the Fates intervened. As a young man he saw one too many of his baseball playing friends get hooked on heroin. Instead of becoming a ballplayer, he decided to become a psychologist and for the last thirty-five years has worked with drug and alcohol abusers both in school systems and in private practice. He has treated both the abuser and his/her family. His experience has made him an expert on the subject of alcoholic/dysfunctional families and the roles children are fated to play if they have the misfortune to grow up in one.

As he grew in his understanding of alcoholism's effect on children's lives, he concluded that his favorite Yankee, Babe Ruth, an alcoholic's son, had no choice but to become a hero: it was his predetermined "role". He was alcoholism's "hero child" long before he was Baseball's Greatest Hero. He decided to write a novel that would explain the lifelong roles played by people who grow up in alcoholic families. In it Babe Ruth's "true" story would be told. The result was, Conditional Love – A Story of Battered Emotions, the story of a modern day detective who while attempting to solve a young woman's murder is revisited by the invisible friend he had in childhood... Babe Ruth! In return for helping him solve the murder, Ruth wants his true story told by the detective. The novel blends an intriguing murder mystery with a revision and "correction" of Babe Ruth's history.

Michael J. Canzoniero is passionate about helping people become aware that they can break out of their childhood roles and free themselves to make healthy choices. Married to his wife, Dianne, for forty-five years, the couple currently lives in Shoreham, on Long Island, and is frequently surrounded by their tribe of four married children and eleven grandchildren. In addition to his keen interest in psychology and his passion for scuba diving, Michael also has a great love for baseball, and golf.

“A deft thriller with an important message about the lasting damage of alcohol abuse.”
– Kirkus Reviews 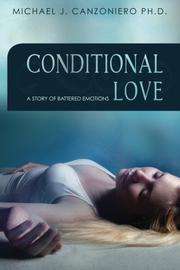 A young woman’s mysterious murder forces a troubled detective to come to terms with his past.

No one can figure out who killed Greta Broz. She was discovered dead in her Long Island apartment from a gunshot wound. The problem? There’s no bullet to be found. That’s not the only confounding thing about the young Hungarian immigrant’s death that Detective William Hael discovers as he investigates the crime. The victim was mild-mannered and had no enemies. But as Hael digs deeper, disturbing truths about Greta’s past surface. Her father was an alcoholic imprisoned for murder, and her uncle sexually abused her. Hael’s own father was an abusive alcoholic and the case stirs up unpleasant memories and emotions, which express themselves in a series of dreams starring baseball legend Babe Ruth. Then Greta starts appearing with Ruth in the dreams (“Could the Babe, in holding Greta’s hand, simply be saying the two of them were connected? And if they were connected, what was the tie that bound them? Was it their father’s drinking?”). The Great Bambino seems to be trying to tell the detective something important, but Hael may not get the message before the killer strikes again. This debut novel is half hard-boiled mystery, half psychological study of the lasting damage and pain caused by abusive, addicted parents. That’s not surprising given that the author is a licensed psychologist who has worked with those affected by drug and alcohol abuse, and he draws on his professional knowledge to explain how children of alcoholics learn to cope. This information, while enlightening, is occasionally a bit didactic; some passages read like excerpts from a Psych 101 textbook. The detective’s obsession with Ruth and the related dreams are an inventive way to explore the character’s psyche, but sometimes disrupt the narrative’s flow, as the action pauses while Hael recounts another strange vision. Some readers may wish the narrator spent less time dozing and more time detecting. The book’s core mystery is clever and engaging, complete with effective red herrings, colorful cops, reliably sketchy informants, and dynamic action sequences. The case wraps itself up in a satisfying way, but the resolution to Hael’s troubles with his father is a bit too pat, especially because dad only appears in person in the final pages.

A deft thriller with an important message about the lasting damage of alcohol abuse.

We have two lives: the one we learn with and the life we live after that.

A Long Island, New York–based homicide detective searches for a killer who may be his therapist friend’s patient in Canzoniero’s (Conditional Love, 2015) thriller. In 1991, DS William Hael’s newest case promises to be grueling: retired teacher Armand Esposito’s mutilated body is found nailed to a wall, akin to a crucifixion. Hael has been tormented since the deaths of his wife, Kathy, and 8-year-old son, Billy, in an accident; he feels that he could have been a better husband and father. He’d previously seen psychologist Dr. Michael Franz for help in raising Billy, who displayed symptoms of ADHD. As it happens, Franz may also have the key to solving the Esposito murder. Three people have been occupying the doctor’s mind lately: emotionally disturbed former patient David Ulster and current patients Jack Rose, a psychopath, and Dolores Witowski, who suffers from multiple-personality disorder. One of them is connected to the recent killing, but although Franz can describe the patient’s demeanor and history to Hael, he can’t divulge his or her name. The detective finds that he can relate, in one way, to the three suspects; like him, they endured childhoods with abusive, alcoholic fathers. But as he investigates, it turns out that time is not on his side: the killer has targeted Franz, and Hael himself could be next. Canzoniero dives deep into what goes into the psychological makeup of a murderer, and his characters are suitably complex. Their environments often symbolize their internal agonies; David’s family home, for example, has “multi-colored floral wallpaper” that’s badly peeling. The story is a whodunit, with some parts following the unnamed killer’s actions. Most readers will likely guess the culprit. Nevertheless, the author effectively augments the mystery by having Hael link Esposito’s murder to a similar death two years earlier—and a second murder in the present day. A sufficient mystery that’s amplified by richly developed characters.
Published: Dec. 11, 2017
ISBN: 978-1-4808-4883-2

Sharks Online begins with a fatal accident befalling a scuba diver in the Coral Sea. It is based on my work with Viet Nam veteran, a cryptographer, who told me he felt responsible for the deaths of thousands of his fellow soldiers. He had known a military secret which he swore never to reveal. It involved the US Government's covering up it's pre-knowledge of the Tet Offensive. With information revealed by President Johnson's Secretary of State, Mr. Robert McNamara, serving to validate my patient's story, I have written a novel that entwines his tragedy with the drama of scuba diving, the intrigue of computer online services, and the unyielding purity of the human heart.