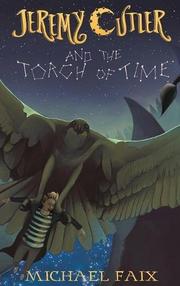 JEREMY CUTLER AND THE TORCH OF TIME

This debut middle-grade fantasy stars a boy whose true parentage hints at a magical destiny.

Ten years ago, Todd Selby missed his morning train at Waterloo Station in London. He also happened to save a woman who’d been jostled by rambunctious children from falling. Enter Grimble the goblin, who presented them with a swaddled baby. He told them to take the child east to Canterbury and settle there. The enchanted couple did so, and now the child is 11-year-old Jeremy Cutler. He has no idea that he’s an Everborn, from the magical kingdom of Averland. Nor does he realize that Harkkruin, the Dark Apprentice of Mordin, once again moves against the Everborn people. Only Jeremy’s neighbor Charles Gaper seems capable of preparing the boy for the challenges ahead. He places Jeremy on a special train to Coventry and into the care of Mr. and Mrs. Nockins, fellow Everborns. From his room in their home, he accesses a tunnel leading to the Fairwoods of Averland. He soon meets his mentor, Windermere Hawksley, who gives him the Seeson and Thyme Observation Deck of cards and informs him that his real parents await in the lost Castle of Airenel. In this novel, Faix unfurls a vibrant, complex tapestry reminiscent of J.K. Rowling’s Harry Potter universe. Adding emotional weight to the narrative is that it’s set during Halloween and then Christmas, holidays that Jeremy’s adoptive mother, Sharon, hasn’t had the heart to celebrate in the years since her own mother died. Her awakening from a depression coincides with the protagonist’s descent into the magical. Though Jeremy is 11, older teen readers should enjoy the detailed plot that involves a rash of kidnappings, time travel, and numerous inventive fantasy scenarios. One episode includes the pirate ship Polaris, which carries Jeremy upriver and through a forest lit by colorful fairyflies, where “the air tasted sweet and cool, with hints of peppermint and gingerbread.” This opening volume of a series also introduces fellow youthful adventurers Tripp Cunning, Ree Spinnler, and Ckyler Blewett, with whom our hero must prepare to face darker threats.