Michael Gerhard Martin grew up in central Pennsylvania, and lived in Pittsburgh for over a decade. He holds an MFA in fiction from the University of Pittsburgh and teaches writing at Babson College. He took his first writing classes through the Johns Hopkins University Center for Talented Youth summer programs, and returned there to teach Fiction for 16 summers. He lives in Beverly, on the Massachusetts coast, with the poet and memoirist Ellen Goldstein.

“...these stories achieve the far-too-uncommon accomplishment of realistically and lovingly depicting everyday people as they stumble and try to break free of their bonds.”
– Kirkus Reviews 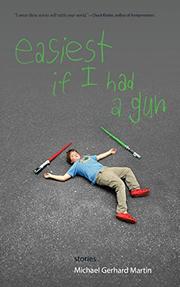 Easiest If I Had A Gun

These nine stories rarely leave the confines of the western part of the Keystone State, but all their characters dream of escape in various ways. For some, this means running off to college; for others, it simply means sitting in a junkyard Bonneville, imagining they’re a character in The Dukes of Hazzard, speeding away. The 10-year-old narrator of “Seventy-Two-Pound Fish Story” yearns so much for a meaningful father-son excursion that he begins conflating fact and fantasy. The adults in the story, who mostly remain in the background, do this as well. In “You Gotta Know When To Hold Them,” a mother loses herself in sanguine romantic novels and fantasies of a better life while refusing to believe it’s possible for her son to have head lice. Likewise, the mother in “Dreamland,” as the title suggests, is so lost in her own alcoholic world that she can no longer see the consequences of her actions. Although these narratives of struggle and desire might sound bleak in summary, Martin is smart enough not to let his stories be overtaken by sentimentality or despair. Nor does he attempt pat endings full of epiphanies or moments of transcendence. Instead, these stories achieve the far-too-uncommon accomplishment of realistically and lovingly depicting everyday people as they stumble and try to break free of their bonds. For example, readers will recognize the adolescent who can’t stand his ex-girlfriend but nevertheless wonders “if she would still have sex with him.” Refreshingly, Martin’s writing not only contains deep currents of empathy, but is also consistently vivid and alive, whether it’s capturing the stilted dialogue of teenagers or pausing to consider the small wonders of the world (as when a fishing line flies out “like a slow breath”). In short, the stories in this collection often feel heartbreakingly real in the best possible way: they show readers humans, flawed and frustrated, just trying to survive.

A moving, entertaining set of stories from a notable new voice.

My reading at the Salem Lit Fest in 2015

Easiest If I Had A Gun: Iowa and Johns Simmons finalist, 2014