A senior executive with over 35 years of demonstrated leadership and accomplishments in the areas of marketing communications, management and politics. Served on the Board of Directors of several companies. Currently an author whose first book is a biographical humorous account entitled Boss Nova Odyssey of four phases of his business career. Working on a second book now.

“East” which brought the concept of Pan Asian cuisine to Sao Paulo Brazil in this the third restaurant venture of Greysage. Selected by Brazil’s equivalent of the Michelin Guide for three years in a row as one of the best restaurants in Brazil, “East” has been the place to be for famous people in the fashion industry, TV, movies, advertising, business and government. Created the restaurant, managed all personnel and details of the operation and secured all capital for the project.

Global responsibility for CRM unit for the main agency—my charge had offices in 31 locations worldwide with over 600 employees and $525 million in annualized billings.

Background ranged from politics to marketing to owning my own businesses.

Born in London, England and holds dual citizenship: UK/US
Have worked, traveled and lived in: US, Europe, South America, Asia and Australia.
Speak Portuguese at the conversational level

-Atticus Award from WPP Group for article on “Knowing your Customer”
-Out of the Blue Magazine –Winter 1999 J. Walter Thompson
“Leading the E-commerce revolution”
-Multiple speaking engagements in: US, Argentina, India, Spain, France, Thailand and Japan
-Board of Directors: J Walter Thompson---world’s oldest advertising agency with 200 offices in 90 countries and 4 technology and consulting companies
-Boss Nova Odyssey a humorous book about my life/business experiences in the US and in Brazil. Currently working on a second book.

“The second half of Graham’s memoir details the joys and challenges of operating a restaurant in a foreign country. His tone is casual and self-deprecating and he offers hard-won, useful advice to would-be entrepreneurs....that delivers some worthy business tips and entertaining anecdotes.”
– Kirkus Reviews 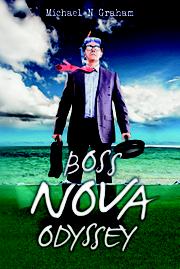 A debut memoir recounts running a restaurant in Brazil.

Graham begins his book with the opening of East, a restaurant in São Paulo that he describes as “Shanghai opium den meets London lounge.” Although he lived in Brazil as a child, he spent most of his career in the U.S. In his 20s, he opened Forklift, a restaurant at a Utah ski resort. Optimistic and impulsive, Graham knew little about business but outlined a seven-step plan, starting with “get inspired” and ending with “live the dream.” Forklift flourished but he soon grew bored: “Work was now drudgery...I needed change.” He became chief of staff for Utah Gov. Scott Matheson and then moved to Washington, D.C., and spent many years in advertising. In each of these jobs, he found success; he was the “new boss.” But again, he grew restless, and after visiting Brazil on business, he decided to open East. The second half of Graham’s memoir details the joys and challenges of operating a restaurant in a foreign country. Tellingly, he never learned to speak Portuguese and seemed constantly in awe of and frustrated by Brazilian life. He recognized inequality and discovered that his staff saw him as a “gringo conquistador.” He aspired to a unique menu and décor but found himself “caving in to Brazilian expectations, sushi,” and open seating so guests could “show off their latest botox treatment.” Through financial, staffing, and menu troubles, East thrived for four years. Graham returned to America to write his memoir yet his chatty book reads like a crowded fusion restaurant, as if he began talking over drinks and stopped only when the establishment closed. His chapter titles suggest a similar pace. His tone is casual and self-deprecating and he offers hard-won, useful advice to would-be entrepreneurs. But the work is unfocused and uneven. He spends several pages on his dog chasing a squirrel, for instance, but mentions his children in just a few words. The volume’s most enjoyable parts focus on East.

A meandering account that delivers some worthy business tips and entertaining anecdotes.

“Twenty years from now you will be more disappointed in the things you didn’t do, versus the ones you did do. So, throw off the bowlines. Sail away from the safe harbor. Catch the trade winds in your sails. Explore. Dream. Discover.” Mark Twain