A New Jersey transplant, Michael Infinito resides in coastal North Carolina, where he spends his time creating unique works of dark fiction. With four published novels under his belt, and an ever-growing list of positive reviews, he is never at a loss when it comes to whipping up a twisted tale.

“In short, this page turner is definitely not for the faint of heart.”
– Kirkus Reviews 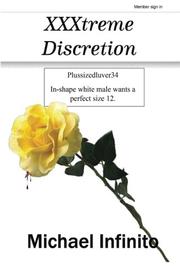 A psychopathic serial killer who finds his female victims on a hookup website meets brutal justice with the help of a ghostly boy in this paranormal thriller.

Dwight Barnes, 36, a psychopathic serial killer, likes to cruise the hookup website XXXtreme Discretion to find his victims. Using handles like Plussizedluver34 and Lovemlarge36, Barnes hunts targets on the heavy side, unable to stop until he finds a perfect size 12. His “dream girl” must also wear a yellow dress, which he will use to clothe his dead beloved, whose rotted corpse he French-kisses in a coffin in his basement. Unfortunately, the insecure women he meets online tend to lie about their weight. When Barnes, the wealthy owner of a New York–based accounting firm, discovers their dishonesty, it triggers outbursts of lust and violence that will leave some readers queasy. (A meat grinder and a hungry dog come in handy.) But screams are futile in the dungeon of Barnes’ remote hunting lodge in Pennsylvania. That is, until Monica Ross, a Roxbury, New Jersey, detective, sees that several missing women bear striking similarities. As she zeros in on Barnes, a ghostly boy appears in front of her car in a dark tunnel. As the boy lays in a coma in the hospital, his disembodied voice in the minds of key players will ultimately lead to the killer in a ghastly climax. Along the way, Infinito (The Secrets of Hallow, 2014, etc.) plunges readers elbow-deep into scenes of gore and torture. He also deftly “brings to life” the corpse, which, Son of Sam–like, directs the killer’s moves. Though well-paced, the novel’s tone sometimes wavers: “Raised by an abusive father who spent more time fucking him in the ass than teaching him about life, Dwight never thought he’d learn how to give his heart to another person.” Some readers will also shudder as children are maimed and murdered. In short, this page-turner is definitely not for the faint of heart.

Flashes of Psycho on a ride through the gruesome landscape of a corpse-obsessed serial killer, with  supernatural boy as hero.

The great fish moved silently through the night water, propelled by short sweeps of its crescent tail. (Opening line of Jaws by Peter Benchley)

I'm a Jersey guy, so a curse word or two come to mind. haha

Putting my thoughts on paper.

12:19…The time has been set… Violet and Johnny Dotson pull up stakes and relocate to the beautiful countryside near Asheville, North Carolina in an attempt at starting their lives over after series of miscarriages. Unbeknownst to them they have actually been summoned there by a higher power. Locked away in a mountaintop mental institution, J.C., a mysterious man who was the only survivor found at the scene of a brutal murder/suicide, will only utter five words… “I am the son of God.” Strange events centered around the unknown patient spur Detective Tom Drayton to connect several bizarre deaths to the time of 12:19. Armed with an old priest’s advice and a touch of new found faith, Tom follows a path that could very well lead him to the destruction of all mankind. But is he doing God’s bidding, or could he in fact be the dreaded serpent himself? 12:19…The clock is ticking….
Published: Nov. 10, 2014
ISBN: 1771276363

Everyone has their own identity, but after an unexpected encounter with a forest girl named Diane at his parent’s summer lake retreat, 15 year old Miles Hanson realizes he might just have two of them. Intrigued by the impossible past of which she speaks ,their love blossoms quickly, as does the mystery surrounding her presence. After some investigation alongside his father, a lifelong lake visitor who had also encountered his own version of Diane as a child, Miles soon learns about a local mystery involving The Colby Ghost. The tale centers around a young couple who had disappeared three decades earlier. Their names—Miles and Diane. Pulled away from Oak Lake for good, a result of family issues, Miles must fight his way back there in order to learn the hidden truths about the missing couple, as well as some shocking revelations concerning his own life. But will Celia Walton, a new love at home, complicate things, or is her involvement all part of Diane’s master plan? In the end, Miles must make an emotional decision that will affect his future in ways unimaginable, and one girl will be heartbroken. Or will she?

The Secrets of Hallow

Jack Pimpkin is about to hear the history of Halloween in a way it's never been told before. That’s because the curious young boy has turned to the only person in the world who supposedly knows the truth…his dad. From a rural town in modern day New England, the creative father weaves together an intricate bedtime tale involving long-lost villages and unforgettably unique characters, including a race of reptilian warriors and the ominous Pumpkin Man. Banished from the safety of Hallow, timid Hazel must survive The Demon Forest, on a journey to locate the mythical city of Salem. Unfortunately, harsh conditions and violent creatures stand between her and her goal. Told of her plight, another young boy braves the elements in a quest to bring her home. Armed with a little magic from an unlikely source, he too finds the dark woods a formidable foe. Can either of them make it back? It's unlikely. The odds, and hungry wolves, are stacked against them. A fast paced, mystical story, The Secrets of Hallow is filled with moments of tragedy and triumph. Jack Pimpkin learns a host of life lessons along the way as the dark twists and turns of his father's fantasy lead him to a real place—one much scarier than anything he ever imagined possible.
Published: Oct. 10, 2014
ISBN: 9781771275934