Michael J. Fitzgerald writes environmental suspense novels, focusing on citizen activism. His fictional landscapes reflect the passions of the protestors around the world who are defending the planet against the ills of hydrofracking, oil and gas pipeline proliferation, and water, air, and soil pollution. His first two novels have both been nationally recognized. His third novel is expected to be published in 2016.

Fitzgerald is a professional journalist and editor who writes novels based on his years of reporting on politics, government and the environment. He continues to write a weekly newspaper column for a daily newspaper in upstate New York.

The genesis for his first novel, "The Fracking War", came from seeing 'No Fracking' signs posted along the highways of rural counties in New York. He erroneously thought the signs were a humorous reference to a phrase used on the television program Battlestar Gallactica, not the environmentally disastrous technology known as hydrofracking. He's become an expert eco-political reporter, writing about how critical public policy decisions are being made with a single-minded focus on corporate profits, rather than the good of citizens or the environment. Four years after his return to his New York roots, hydrofracking was banned in the state.

Fitzgerald worked as a writer and editor for six daily newspapers in California and has published hundreds of articles and photos in regional and national magazines.

He is a veteran sailor, sailing extensively offshore in his 48' sloop from California to Mexico. He continues to travel and studies the impact of humans - and industrial technology - on the planet. Fitzgerald is a professor emeritus of Journalism at California State University, Sacramento. He grew up on the shores of Lake Chautauqua in New York. He is married to journalist and editor Sylvia Fox.

“Former reporter Fitzgerald offers readers every angle they could ask for in the war between a small town and a company that would seek to subvert free speech and constitutional rights.”
– Kirkus Reviews 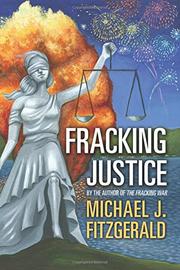 In this sequel to The Fracking War (2014), a small-town New York newspaper crusades against a thuggish energy company.

After losing his wife, Devon, to a drowning accident, journalist Jack Stafford returns from the island nation of Tonga to Horseheads, New York, with his 3-year-old son, Noah, and sister-in-law Cass. At the Horseheads Clarion newspaper, Jack takes the publishing reins back from editor Eli Gupta in time to dedicate his “Column One” editorials to the unsavory activities of Grand Energy Services. The company wants to store propane and natural gas in the salt caverns of Rockwell Valley, Pennsylvania, and build a pipeline through dairy farm country—with minimal input from the citizens affected most by the activities. Jack and his team of journalists use the paper to educate and warn the people of Rockwell Valley that fracking—which blasts water and various chemicals through shale to dislodge gas deposits—adds toxins to water supplies and increases the likelihood of earthquakes. There’s also the danger of stored gas leaking and exploding. Grand Energy, however, is run like a mob by CEO Luther Burnside. He’s got local politicians and judges in his pocket to smooth the way for his greedy agenda, which calls for shipping most of the gas overseas. Balancing the scales are the supposed eco-terrorists, the Wolverines, and a no-nonsense retired teacher named Alice McCallis. Former reporter Fitzgerald brings the weight of a long career to this series; his latest novel offers readers every angle they could ask for in the war between a small town and a company that would seek to subvert free speech and constitutional rights. Scenes with Jack and his staff are often a crash course in deft reportage, as when Jack warns a writer against skimping on scientific detail: “We are publishing stories and photos and videos about an environmental war that the public is losing,” he says. “I can’t have soldiers who don’t know how to fight.” Jack’s personal drama, including his traumatized son who can’t speak, ends up adding a positive human element to a narrative flush with despicable politics and chaos.

Reads like an emergency manual for activists battling environmental despoliation.

Poor No More by Robert Ruark

Veteran investigative reporter Jack Stafford relocates from California to rural Upstate New York and immediately discovers a citizen rebellion that models itself after Edward Abbey’s 1975 novel The Monkey Wrench Gang. In The Fracking War, activists use sabotage to defend their land and lifestyle against what they perceive as industrial terrorism, perpetrated by multinational corporations’ environmentally damaging practice of hydrofracking for natural gas and oil. Set in the pristine Finger Lakes wine country of New York and neighboring Pennsylvania, Stafford and the newspaper staff witness the tragic impacts of fracking on local citizens and their communities—the health risks, water and air pollution, and a rapid increase in crime. The fictional events in The Fracking War were pulled from newspaper headlines and other documented occurrences not only in the Northeast United States but also across the globe. The fast-paced novel offers a glimpse into an escalating conflict between citizens who want to protect their communities and the nearly out-of-control expansion of the natural gas industry’s controversial method of hydrofracking to extract natural gas, affecting homes and communities in uncharted ways.
Published: March 1, 2014
ISBN: 13:978-1-62652-706-5