Michael Mucci, an award-winning author has spent his entire adult life traveling and exploring the world. Being a zealous adventurer and explorer, he has lived on 3 continents, and has traveled to over 40 countries.
From rafting down the Amazon in a dug-out canoe, panning for gold in Alaska, going on safari in Africa to tent-camping 200 miles north of the Arctic Circle and riding his motorcycle through the European countryside, Michael has enjoyed learning and participating in different cultures around the world.
He grew up in a small town in Pennsylvania where the people and places have inspired his novels and now calls southwest Florida home.

“Author Mucci sets up a juicy murder mystery, opening with a coldblooded murder and an early indication of conspiracy...the novel's latter half really ignites.”
– Kirkus Reviews 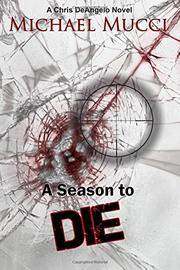 A SEASON TO DIE

Philadelphia Sheriff Chris DeAngelo returns to solve the killing of a political candidate’s wife, complete with a plethora of suspects and motives, in this thriller.

Checking on a car accident, DeAngelo’s taken aback when realizing the body behind the wheel is Sherry Mills, wife of Republican senator/gubernatorial hopeful Steven Mills. But it gets worse: her death was by gunshot. Mayor Elaine Strick wants to expedite the investigation and get it out of the papers, because her town of Macon is suffering from the notoriety surrounding a recent serial-killer case, which the sheriff wrapped up. She nominates the husband as the initial suspect, but then Strick’s also supporting Mills’ primary opponent, Rupert Kerman. As it turns out, there are quite a few people who had reason to prefer Sherry dead. Whoever had been supplying her with pills, for one, may have wanted her silenced, as would certain individuals with knowledge of her affair with a restaurant owner. DeAngelo and his always-reliable deputy, Rosemary Tippets, sift through the evidence to narrow the suspect list, but the most likely person winds up a murder victim, leading to further questions. The sheriff soon comes across more bodies and finds himself in someone’s cross hairs, in a town where everyone seems to use the same .308-caliber rifle that killed Sherry. Mucci’s (A Season to Kill, 2015) tale is dense with plot, which includes an assortment of felonious deeds, from blackmail and burglary to a mobster’s presence. Pinning down a murderer—if it’s just one—is a challenge, but with DeAngelo at the helm, it’s likewise absorbing. The sheriff, for example, rarely sways; sure, he takes time to flirt with “super-hot bartender” Maryanne, but only because she works at the restaurant owned by one of his suspects. DeAngelo layers his first-person narrative with cynicism, equating a snow-covered property with “an arctic outpost in desperate need of resupply.” But he combines this hard-boiled detective quality with a pragmatic outlook, which truly makes him stand out: he’s a struggling alcoholic who still drinks, just less than usual. The sheriff’s a work in progress, knowing his success requires time and effort, an approach he applies to his investigations.

A measured pace as methodical and practical as the murder story’s diplomatic protagonist. 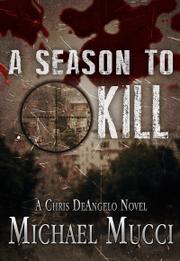 A Season to Kill

In Mucci’s thriller, a sheriff in a Philadelphia suburb surmises that a string of missing people is actually the work of a serial killer.

Christian DeAngelo is the new sheriff in town, promoted from deputy after Sheriff Holbrook succumbed to a heart attack. During Holbrook’s legendary reign, the town of Macon didn’t have a single murder in over 20 years. But Macon’s had its share of mysterious disappearances: a local reporter points out to DeAngelo that Roger Sharpe is the 11th missing person in as many years. Evidence suggests, however, that someone killed Roger, and DeAngelo, noting that at least some of the vanished have committed infractions (like meth-dealing/-manufacturing Roger), believes the others are murder victims as well. DeAngelo, a notorious drunk, may have to step away from the barstool if he wants to stop a murderer. Author Mucci sets up a juicy murder mystery, opening with a coldblooded murder and an early indication of conspiracy, with DeAngelo uncovering someone’s sizable deposits (i.e., payoffs). The sheriff’s investigation largely comprises DeAngelo perusing the files of the 10 preceding cases, making headway only when more than one witness steps forward and there are additional murders, these with actual bodies and crime scenes. Readers will likely piece together all the information and name a killer well before DeAngelo does. But the novel’s latter half really ignites. DeAngelo starts to overcome the town’s uncertainty of its latest sheriff (even Holbrook’s widow and the mayor had described him as an inept boozer). When he decides not to drink, DeAngelo and the story focus on the nitty-gritty particulars of the missing person cases, which might lead to a serial killer. Deer-related metaphors abound since the alleged murders happen at the height of deer-hunting season and readers are privy to a murder that resembles a hunt. But Mucci ensures that most of these are subtle and often playful; an anxious man’s panting, for example, is equated to a struck deer “lying on the ground, waiting to die.”

Readers may guess the ending, but the sheriff’s diligent investigation is worthy of cheers.

A Season to Die Book Trailer

Grew up in Central Pennsylvania and now lives in Southwest Florida

A Season to Kill: Next Generation Indie Book Award - FINALIST, 2016

When a man is savagely tortured and killed, Sheriff Chris DeAngelo is plunged into his most challenging investigation yet. In this sizzling mini-novel the trail of evidence leads DeAngelo to confront an adversary who will stop at nothing to defeat him. This is a free mini-novel by visiting my home page at www.MichaelMucciAuthor.com

A Season to Die - A Chris DeAngelo Novel

When the wife of a prominent senator is found dead in her car, the signs point to murder. As the investigation unfolds, suspects begin to emerge and secrets are revealed, forcing Sheriff Chris DeAngelo to risk it all; including his own life.
Published: Jan. 17, 2017
ISBN: 978-1520555171