Michael Novakovic was born in Split, Croatia, his home until World War II forced his family to flee to Italy. After the war, the Novakovics migrated to Argentina and then to New York City where Mike finished high school before enrolling at Syracuse University.

He entered the U.S. Air Force, served in its intelligence operations, and rose to the rank of Lieutenant Colonel. After retiring from the military in 1978, Mike started his own company, Metallic Ceramic Coatings, Inc., a successful business that he ran until his retirement in 2007.

He lives with his wife, Phebe, in Villanova, Pennsylvania. He has a daughter, Phebe, and a son, Michael, Jr., and five grandchildren.

“As the rumble of World War II draws closer, a young boy leaves behind his once-comfortable life in Split, Yugoslavia, to embark on a turbulent adventure.”
– Kirkus Reviews 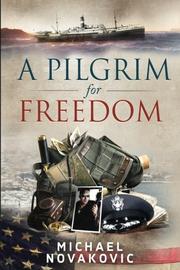 A Pilgrim for Freedom

As the rumble of World War II draws closer, a young boy leaves behind his once-comfortable life in Split, Yugoslavia, to embark on a turbulent adventure.

This debut memoir opens in July 1943, with the 11-year-old Novakovic in flight from his hometown, where “the Axis Powers made life impossible for us.” He recalls street executions and even recounts a time when he was shot at on the way home from school. This new existence, lived in perpetual fear, stands in stark contrast to his past, when he would explore the catacombs beneath the Diocletian Palace, a part of which was owned by his wealthy family. He describes his father possessing three automobiles “when simply owning one was a novelty” and, while dining, how his grandparents would place a gold ducat under the children’s plates as a reward for finishing the meal. Leaving almost everything behind, the family begins an odyssey that first takes it westward to Italy. Suffering with a toothache on the road to Maggio, young Novakovic is unaware that his own personal journey will lead to Buenos Aires and New York. The memoir is divided into four parts, determined by a key moment in the author’s life: “From Split to Milano,” “Becoming an American,” “An Officer and a Gentleman,” and “From an Officer to a Businessman.” Each section remains engaging in its own right. Many passages are so vivid that they startle the reader. At one point, the author describes a fighter plane bearing down on him: “He was also shooting in my direction. I could have decided, like Cary Grant in the Alfred Hitchcock movie, North by Northwest, to run and try to find cover….But I did not choose to use my speed. Instead I stood, looked up, and waved at the pilot.” Yet, beyond war’s chaos, this work examines a life punctuated by achievement, as the author reflects on a dazzling career in the military and as a successful entrepreneur. Written with humility and elegance, Novakovic’s memoir displays a solid command of transnational history, which he wraps effortlessly around his own story, giving the memoir a greater cachet. This book should appeal to readers manifesting an interest in World War II or anyone searching for inspiration in the tenacity of others.

A remarkable and gripping account of a boy fleeing a war-torn nation and eventually flourishing in America.

A Pilgrim for Freedom: Kirkus Star