Connect with Michael A. Sales

Michael Sales' strong desire for adventure landed him in the Army fresh out of high school. That sense of adventure led him to run over a half dozen businesses and he still continues his self employed pursuits.

As a entrepreneurial venture junkie, he finds speculative science fiction writing to provide every bit of the adrenaline rush he craves. 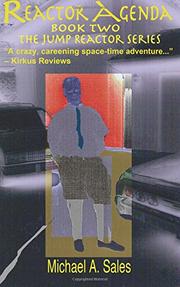 Ray Sky, a superpowered mutant in the 23rd century, travels through time and space to try to subvert an alien contest over the destiny of humanity.

, 2015) absurdist sci-fi, the second in a series, proceeds in its tangled plot with a strange sort of lucid dream–logic and a deadpan treatment of ludicrous events. In the year 2250, Raymond Thadius Sky is a “quad core mutant” descended from Atlanteans, with titanium-reinforced bones, a turtlelike droid companion on his back, and the equivalent of nuclear fusion reactors in his body. He is also a “jump reactor,” one of several chosen by aliens to accelerate humanity’s development into a peaceful, responsible civilization. The scheme—carried out for millennia under the guise of computer-generated angels, spirit possession, and messiahs—is being directed by the extraterrestrial reptilian race called the Hoodia. When Ray realizes it’s all part of a gigantic bet the Hoodia have placed with the Interstellar Gambling Commission, he loses confidence in their good intentions and sets out to loosen their meddling grip on mankind’s destiny. To further this goal, Ray partners with Scalps and Skeletons—an elite secret society with a religious-based master plan to repopulate the Earth with dangerous wildlife that will prey on interloping ETs—as well as above-classified government agency Ultra. Much of the antics, including Ray’s delving into the past of a Rat Pack–esque bunch of roguish entertainers called the Snake Squad, seem like recruiting/hazing rituals rather pointlessly indulged by these shadowy cabals. Finally, Ray voyages through a stargate to the 1980s to harvest hundreds of ferocious grizzly bears and wolves to fight for the future, also uniting several space-going races in battles against compromised solar system installations. He likewise tries to rescue his girlfriend from pseudo-angel captivity. It’s as busy as an out-of-control pinball machine, and after all the wild detours and ricochets, the ending has Ray seemingly reconsidering his mission. There is ample evidence, however, that his weird adventure has not at all ended. 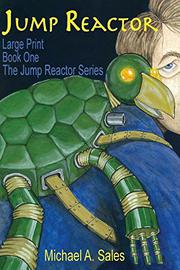 In Sales’ first sci-fi novel in an announced trilogy, a superpowered mutant in the 23rd century trains for his alien-influenced destiny.

In a somewhat Joseph Heller–esque 23rd century, mankind realizes that the Hoodia, reptilian aliens determined to make Homo sapiens less warlike and troublesome, have been guiding its destiny and evolution for millennia. To this end, the Hoodia have used computer projections to simulate “Angels” and spirit-possessions. From time to time, they also create a “jump reactor,” a messiah figure, to kick the paradigm up a notch—an especially high-risk job that can go badly wrong. The latest selection is Raymond Sky, a “Quad-Core mutant” with titanium-reinforced superstructure, an extra lung that allows brief periods of survival in the vacuum of space, and the equivalent of nuclear-fusion reactors in his body. (In the book’s typically wonky fashion, it’s explained that his father was secretly the Greek god Neptune.) He also has a turtle-shaped helper droid, à la R2-D2, who rides on his back and gives him the nickname “the Camel.” After an abortive career as a treasure hunter, the hapless Ray is groomed to become a secret agent. He’s also inducted into the human elite secret society Scalps and Skeletons and still finds time for a beginning romance. It all ends with his first jump-reactor assignment to signal mankind’s leap from glorified monkeys to citizens of the universe. Needless to say, the overall mission is a bit of a silly one, as is the mystifying series of tasks that Ray must complete in the Scalps and Skeletons recruitment ritual. The secret society also eats up a lot of the book’s narrative bandwidth. The book’s lateral-thinking storyline and quirky sense of humor, however, tend to recall the cult-movie hero of the 1984 sci-fi film The Adventures of Buckaroo Banzai Across the Eighth Dimension!. Buckaroo’s credo, “No matter where you go, there you are,” would fit right in with this novel’s prose.