Michael Stephen Daigle grew up in the Northeast United States from the snow belt shores of Upstate New York, to the woods of Maine and the piers of New Bedford, Mass., all the while writing. His first job was picking blueberries in Maine and his last job was a 33-year career as a newspaper editor and writer. He wrote his first novel 22, and a second one at 24. The first one became the basis for the award-winning Frank Nagler Mystery series: "The Swamps of Jersey" (2014); "A Game Called Dead (2016); "The Weight of Living" (2017), and "The Red Hand" (2019)

“The Weight of Living: Well paced...satisfying. An involving thriller with a memorable protagonist.”
– Kirkus Reviews 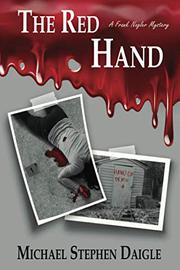 This prequel to the Frank Nagler mystery series helps readers understand how the detective originally struggled, much like the city he serves.

This case is set about 20 years before The Swamps of Jersey (2014), the first of three volumes of Nagler present-day mysteries. Young Frank is a rookie detective on the police force in Ironton, New Jersey, his hometown. He is learning as he goes: “He felt he was running just to keep up, slogging through the everyday stuff of what he didn’t know, what he couldn’t imagine, one hand outstretched to feel the fog.” But a month after becoming a detective, he gets put on the Red Hand murder case, in which four women had been killed in various ways. Tying them together is a red hand-print emblazoned with the words “Hand of Death” at each crime scene. What is making these serial murders more difficult to solve is the lack of a discernible pattern. As Medical Examiner Walter Mulligan explains, “Someone is experimenting in death.” Complicating Frank’s life is that his wife, Martha, his childhood sweetheart, is dying from cancer. In addition, behind the scenes, the mayor and his cohorts are using the paranoia caused by the killings to scoop up real estate cheaply. Furthermore, the chief detective on the case is the mayor’s inside man. So Frank has to push past these personal and institutional obstacles while attempting to solve this baffling case. This dense, engrossing prequel illuminates why Frank embraces Ironton before economic decline and corruption totally savaged the town. Ironton is a character that Daigle (The Frank Nagler Mysteries: An Anthology, 2018, etc.) brings to atmospheric life in his work: “The sun had squeezed out of the mud the greasy mix of rotten plants, moldy, sweating trash, motor oil that had leaked from dismembered, rusted cars parts, and the musk of dead animals, and then compacted it.” It’s a wonder that Frank never fled Ironton, but, through his memories, this novel shows that it was home to him and Martha. That’s why, despite his hard-won cynicism, Frank still holds out hope, much like Ironton itself, seeking to rebound from ruin. This tale also presents younger versions of characters who continue to affect Frank today. These include Martha, newspaperman Jimmy Dawson, priggish superior Chris Foley, and down-on-his-luck Del Williams. This allows readers to gauge how relationships with Frank have developed through the decades. The author’s pacing is immaculate in this gruesome thriller, as he ratchets up the tension as each additional body is found. He also captures a portrait of a once-thriving community in chaos as fear sweeps through Ironton. While the fledgling detective often finds himself adrift while investigating the case, Frank’s moral compass never wavers, even when the town and its officials are ready to lynch an unlikely suspect. This makes him almost a lone voice in the wilderness but his gut proves right in the end. What results is a taut look back at the birth of a memorable character.

A winning origin story for one of modern fiction’s expertly drawn detectives. 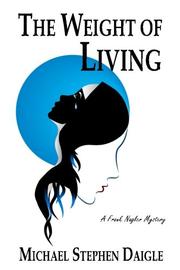 THE WEIGHT OF LIVING

The third volume in Daigle’s (A Game Called Dead, 2016, etc.) mystery series tells the continuing story of a detective as he and his New Jersey manufacturing town recover from setbacks.

Frank Nagler is a dogged investigator with the Ironton, New Jersey, police department who’s seen his town decline over the years due to plant closures, crooked politicians, and a devastating flood. He shut down emotionally after his young wife Martha’s death, finding solace in his work. Lately, a burgeoning relationship with Lauren Fox, a city planner, has been bringing him back to life. Ironton is also enjoying a renaissance with a progressive mayor and small cluster of new stores downtown, including a bookstore owned by Frank’s friend Leonard. But a pall falls over Ironton when a traumatized young girl, wearing just a tank top and shorts, is found in a dumpster on a cold night. At the same time, a mystery group is illegally obtaining local properties. Investigating both cases leads Frank to unearth an evil family’s history. The cases eventually threaten the safety of people important to him, including Lauren; his ancient mentor, Sister Marie Katherine; Leonard; and Leonard’s girlfriend, Calista Knox. As Frank’s friend Del Williams explains, “You see how deep the poison goes, how strong is the wrong in what they doin’ and your soul cries out for justice and you just wanna bring ’em down.” Before the action is done, neither Frank nor Ironton will be the same. Daigle has done an admirable job of portraying the evolutions of Frank and the hometown that he loves and protects. The detective realizes that Ironton has flaws, some self-inflicted, but he’s not ready to give up on it or its people. Many of those people are shown to have his back, as well, including Lauren at home and his colleague Lt. Maria Ramirez at work. This helps him to unravel a complicated, sometimes-repulsive mystery that spans decades and several states. Daigle’s narrative is well-paced, allowing the reader to piece together the clues right along with Frank, and it all leads to a melancholy but satisfying conclusion.

An involving thriller with a memorable protagonist.

The second Frank Nagler Mystery. Two college women are beaten and one dies. Then a series of incidents in Ironton occur: Nagler's friend Leonard's bookstore is demolished and the city's community center is burned. Claiming responsibility is an Internet terrorist named #ARMAGEDDON. The title is from a video game gone live played by college students, including the victims. The story is structured like a game: Who makes the rules, and who changes them last, wins.
Published: April 15, 2016
ISBN: 978-1-944653-00-2

It’s the time of pay phones, fax machines and piles of paperwork. And in Ironton, N.J., nine women have been killed, their deaths played out over months as fear grows in the city. Into this scenario is newly-minted Detective Frank Nagler, eager to take on the task of finding the killer, but daunted by the description supplied by the medical examiner: “What we have here is an experiment in death.” “The Red Hand” is a prequel to the award-winning Frank Nagler Mystery series. Among the characters we meet are Charlie Adams, a teenage hoodlum and Martha Nagler, Frank’s wife, whose love carries him through the bad times ahead. Can an old-style detective story capture a modern audience? It can if it is filled with characters that resonate, has a love story for the ages, settings that carry weight and is layered with issues that raise the story above the everyday. It’s gritty, moving, probably confounding, but it resonates. Women are missing. Missing would imply a willingness to leave. They are not missing: They were taken.
Published: June 30, 2019
ISBN: • ISBN-10: 1944653198

The Swamps of Jersey

The First Frank Nagler Mystery. Ironton, N.J. is an faltering factory town that gets slammed by a week-long tropical storm. A mutilated body of a young woman is found in the Old Iron Bog during the storm. Nagler must solve that killing as he pieces together what appears to be the theft of money from city accounts. At the same time Lauren Fox, with whom Nagler has begun a relationship, disappears, and some evidence suggests her absence is related to the theft of city funds.
Published: Nov. 10, 2014
ISBN: 978-0-9908465-1-2

Who Shot the Smart Guy at the Blackboard?

Reporter Derek Mainley attends a political fundraiser after reporting on the murder that day of a college professor. He meets the fundraiser's subject, federal prosecutor Cassie Blondell, who one dated the victim. In a teasing, sexy short story, the pair spar over the death, what it might mean, and who could be the killer.
Published: Nov. 5, 2017
ISBN: B077PDMP9K