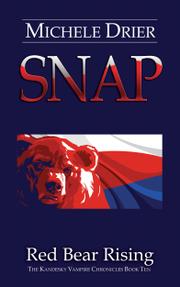 The Kandesky vampires combat forces invading Ukraine while a woman contemplates joining the formidable family in this 10th installment of a series.

Jazz Fall doesn’t question her love for centuries-old vampire Nik Kandesky, which is why she agreed to marry him. But she’s understandably anxious: Jazz is a “regular” (a mortal) and wedded bliss with Nik entails becoming one of the undead. She seeks advice from her vampire pal Maxie, a former regular whose husband, Jean-Louis Kandesky, is second-in-command of the Kandeskys. Both women hold significant positions at SNAP, “the world’s largest and richest celebrity gossip empire,” which provides much of the Kandeskys’ wealth. But Jazz isn’t only worried about a drastically different vampiric life; Nik has an apparent desire to control her, a problem Maxie faced with Jean-Louis. Meanwhile, what appear to be Russian soldiers stage an attack in Odessa in Ukraine, the country where the Kandeskys live. The vampires try to determine whether the Russians’ incursion is a terrorist strike or an act of war; the latter could feasibly ignite World War III. Their quasi-investigation leads to confrontations with the invading enemy that ultimately put everyone, including Jazz, in danger. Drier (SNAP: I, Vampire, 2016, etc.) convincingly incorporates vampires into a soap-opera narrative. Jazz is comfortable with the notion of vamps; her biggest potential loss, it seems, is food, as the Kandeskys only consume blood. Though there’s little action in the tale, the author deals with violence in clever ways. For example, in one scene, Jazz experiences a gunfight and explosion by sound alone, as she takes cover inside a limo. The lucid story, centering on the couples’ relationships, makes strong points about vampires and regulars alike, particularly that both parties should be willing to compromise. But that message, at least in this installment, doesn’t wholly succeed: Jazz’s life will radically change whereas Nik will sacrifice hardly a thing.

A curious vampire tale that zeros in on the human element.

Getting what you wish for can bring unintended circumstances.Jennifer in New York and Matt in San Francisco worry that they're losing their memories. Jennifer from an earlier trauma and Matt while watching his father succumb to Alzheimer's. After finding a new medical technology designed to help people with cognitive disorders, they independently track down a grey-market supply, but when they meet they find unknown terrors.

Danube: A Tale of Murder

The Kandesky management trio, Stefan, Jean-Louis and Pen, find themselves embroiled in a war with their rivals, the Huszars, which is bad for PR and bad for business, but after a judicious assassination they hammer out a pact. This fourth book of the Kandesky Vampire Chronicles tells of peace agreements with their rivals and the growth of their now-international business ventures. It also follows Jean-Louis as he meets and falls in love with a young artist, Magda, who desires travel and adventure but never imagined the world the Kandeskys inhabit

California is in the middle of a catastrophic drought and water managers are scrambling to find ways to conserve the resource. The Governor has proposed a plan to dig massive tunnels under Delta, a sprawling tract of islands, sloughs, farms, marinas, resorts and historic small towns. The project will ship Sacramento River water south, to the thirsty corporate farms and cities of Central and Southern California, not a popular idea in Northern California. When two bodies turn up at a state corporation yard in the tiny Delta hamlet of Freeland, Amy Hobbes and her police reporter, Clarice, are determined to find out if water is an issue worth killing for.

Amy Hobbes never expected to solve anything tougher than a crossword puzzle. When she left her job as a journalist in Southern California, she planned to give the adrenaline a rest, but her next job, managing editor of a local newspaper, delivers some surprises. After a respected Senator and World War II hero dies and two more people turn up dead, the news heats up. Both victims had ties to a hotel owned by the Senator's family. With the help of reporter pal Clarice and the new man in her life, Phil, Amy uncovers a number of shadowy figures, including a Holocaust survivor who's spent sixty years tracking down Nazi loot. It's a complex and dangerous puzzle, but Amy can't walk away until she solves it

Vineyards around Monroe are being harvested, the ripe grape bunches sliced off the vines and trucked to wineries, where they’ll be crushed to make some of California’s finest wines. Amy Hobbes, managing editor of the Monroe Press has other stories in mind, until Clarice Stamms, her cops reporter blows in with news about another harvest, two bodies tucked up under the vines. The field workers were stabbed and their throats sliced. Are they just victims of a worker’s anger? When the town’s most popular and well-known hooker turns up at the vineyard’s labor camp, sliced and stabbed as well, Amy and Clarice are on the hunt again, the adrenaline tingling down their nerve endings. Who’s the killer stalking the vineyards and why?

The third book of the Kandesky Vampire Chronicles begins the saga of the family's start during the chaos of 14th century Hungary. When Stefan's wife and infant son die in a minor plague outbreak, he has nothing to live for, so Theron's turning him to a vampire is just a way out of his anguish. Until he takes over the estate of a merchant, recruits Jean-Louis to teach him business and meets Lady Penelope Kandesky. Plague returns to Budapest and this time paves the way for Stefan to become Baron Stefan Kandesky, a businessman who builds a trading empire with the help of Jean-Louis and Pen.

SNAP: All that Jazz

Nik and Jazz, both employees of Kandesky Enterprises and passionate lovers, are having a tumultuous time. Are their differences too great? She's a contemporary, hip, young career woman working in the fast-changing world of celebrity gossip journalism in Los Angeles. He's a 500-year old vampire living in Kiev, Ukraine and running the Kandesky Munitions factories. She deals with celebs and sun, he deals with terrorists and dark. Is their overpowering attraction enough to build a life-long future, or will their relationship fizzle out before Maxie's and Jean-Louis' wedding, dying faster than a Fourth of July sparkler?

SNAP: Happily Ever After?

Loving Jean-Louis for eternity doesn't mean that Maxie Gwenoch will let him turn her. Jean-Louis is a vampire, is gorgeous, is the second-in-command of the Kandesky Family of Hungarian vampires, and is her boss at SNAP, the multinational, multimedia celeb gossip empire where she is the VP for International Planning. She moves to Kiev to build a home with Jean-Louis and finds her future under a cloud from Leonid, a rival from the Huszar family, now living in a bolthole in the ruins of Chernobyl. Will Maxie find safety by giving up her days and joining Jean-Louis in the vampire nights?

Maxie Gwenoch, LA-based media star, VP for International Planning for the multi-national gossip conglomerate, SNAP, has finally agreed to marry Jean-Louis Kandesky, a 500-year-old Hungarian vampire a leader of the family that owns SNAP. Is marriage a big change? Not as big as the fact that Maxie is now a vampire, as well. When munitions from the Kandesky Enterprises weapons plant in Slovakia turn up at the bombing of a Royal's house in England, Jean-Louis and his "brother," Nik, are hot on the trail of shadowy terrorist groups dealing in international weapons sales. Are the Kandesky arms being sold to terrorists groups? Should Maxie use her new-found vampire strengths to ferret out the scum?

Maxie has convinced Jean-Louis Kandesky to take her with a raiding party who are looking to kidnap and erase their deadly rivals, the Huszars. There's just one catch, she hasn't learned enough mind control to stay safe and finds herself the kidnapee, held in the compound with Leonid, now the head of the Huszars. She endures violence and starvation until Jean-Louis and the Kandekys can find her and put into place a trial of the Huszar leaders

In the second book of the SNAP Kandesky vampire series, Maxie Gwenoch, media-savvy editor of the multinational celeb gossip magazine SNAP, is pummeled in Paris and kidnapped in Kiev as the Huszars ramp up the race to oust their centuries-old rivals, the Kandeskys. SNAP's owners, the Kandesky family of vampires, built the world's most popular celeb coverage empire but this isn't just a business take-over. These powerful vampire families lived with an uneasy peace for four centuries until Maxie came in to boost SNAP's coverage and started making inroads into the Huszar's traditional hunting territories. Although Jean-Louis, Maxie's lover, vampire and second-in-command of the Kandeskys, tries to keep her safe, Maxie is determined to do things her way, a way that may lose her her job, her love and her life.

SNAP, a multinational celeb TV show and magazine, is the holy grail for Maxie Gwenoch. When she snags the job as managing editor, she's looking for fame, fortune and Jimmy Choos. What she finds is a media empire owned by Baron Kandesky and his family. A family of vampires. They're European, urbane, wealthy and mesmerizing. And when she meets Jean-Louis, vampire and co-worker, she's a goner. The Kandesky vampire family rose in Hungary centuries ago. They gave up violence and killing to make a killing on the world's commodities markets and with that beginning they built SNAP, an international celebrity multimedia empire. Now cultured...and having found food substitutes for killing...they’ve cornered the world market for celebrity and gossip journalism.
Published: July 2, 2011
ISBN: B0059K50D8

Nik, the third-in-command of the Hungarian Kandesky vampire family, has been handling the family's interests in Czech munition factories for upwards of four hundred years. He's been a contented bachelor, throwing himself into business until Jazz strolls into his life. Jazz is Maxie Gwenoch's successor as the managing editor for SNAP, the international celeb gossip magazine, another Kandesky company. Maxie, Nik, Jazz and Jean-Louis, the Kandesky second-in-command, are headed to Moscow to assess the business potential for a SNAP Russian bureau, until an old enemy shows up. Set against the tensions between Ukraine and Russia, the short Russian nights teach Maxie to cherish her time with Jean-Louis while Jazz faces her own questions about loving a vampire.