Michelle spent her early childhood years living in the suburb of Redcliffe near the domestic airport in Perth Western Australia. At age nine Michelle her parents and three sisters moved out to an old vineyard in the Swan Valley. When her parents marriage ended her father moved out and their mother and her sisters moved to Bassendean. Leaving school at fifteen meant a return to study in later life. In her mid thirties and with two young children and part time work Michelle completed her mature age entry for university. Once graduating from Edith Cowan University with a Bachelor of Social Science (Children Studies) Michelle enrolled directly into a Bachelor of Social Work at the University of WA. On completion Michelle commenced work as a Social Worker in 2001 and remains in that profession fifteen years later. Michelle completed further study when offered sponsorship for a Graduate Certificate in Child Protection Practice. Michelle knows that one person can only do so much but writes 'Burning the Vines' in the hope of creating awareness of the impact violence has on families in general and children in particular.

“A heart-rending story of the triumph of spirit over circumstance.”
– Kirkus Reviews 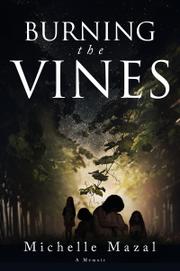 Debut author Mazal writes of living with a violent, alcoholic father in this memoir from Down Under.

The author was born in the early 1960s in Perth, Australia, and her story focuses mainly on her childhood and teenage years. Her father, as depicted here, was never without a bottle of beer in his hand and usually had half a dozen more waiting in the wings. Her mother was just 16 when she married him in a shotgun wedding, incurring her own father’s wrath. She then endured 20 years of being physically, verbally, and emotionally assaulted, along with her daughters, before she finally threw her husband out of the house. During her childhood, food was scarce, the author says; she and the other children were perpetually bruised and malnourished, and her own little teeth began to rot. When she was 5 or 6, she says, she and her two sisters were taken to a dentist; she was given anesthesia and awoke back in her own bed to discover that all her teeth had been pulled, earning her the nickname “Stumps,” a pejorative that followed her until the age of 14. Fortunately for the children, their maternal grandparents were loving and generous, despite their feelings about their daughter’s husband, Mazal says, but although they provided occasional respite, they didn’t live close enough to affect the kids’ daily lives. The chapters of this chilling memoir, organized according to significant events through the early part of her life, are short, evocative, and to the point. The conversational text is pleasantly sprinkled with Australian terminology, adding a local flavor: “with only the screen door between you and the mozzies, the Fremantle doctor (that’s our Aussie name for the breeze as it comes in off the ocean) would make a cool spot on the linoleum.” It could have used a stronger copy edit, but the grammatical stumbles (such as “Dad was pretty good about picking Suzanne and I up”) are minor, and overshadowed by the saga itself. Overall, it’s a painful, compelling read that shows how the author, her sisters, and her mother survived unbelievable cruelty and brutality and ultimately forged new lives for themselves.

A heart-rending story of the triumph of spirit over circumstance.

Burning the Vines: A Memoir