Mike C. Erickson’s birth and early education took place in the idyllic college town of Logan, Utah, but because of a twist of fate he graduated from high school in Honolulu. He left Hawaii brimming with aloha and enrolled at Utah State, where he was awarded two degrees and self-proclaimed minor intellectual status, which was of dubious value when the US Army invited him to vacation in South-East Asia. Ten days after leaving Vietnam, he began decades of dispensing pearls of wisdom as a high school teacher and, on occasion as a community college history instructor in suburban Sacramento. Mike and his wife Trudy, have two grown sons and a grandson born just after this novel. When not in Hawaii or some other exotic locale, they live in Gold River, California. This is his first novel.

“A fast-paced, raucous tour through the last half-century alongside a modern-day Candide.”
– Kirkus Reviews 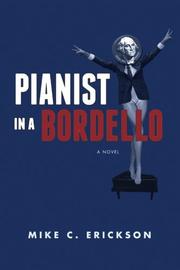 PIANIST IN A BORDELLO

A lighthearted, satirical novel about an honest man who runs for office in corruption-plagued America.

Richard “Dick” Milhous Nixon Youngblood, the smart-aleck narrator of Erickson’s uproarious debut, is the son of commune-dwelling hippie radical Yuri Yablonsky Youngblood and the grandson of powerful Republican Sen. Stapleton Lambright. In this picaresque tale, Dick’s life unfolds in lockstep with the major historical events of the last 40 years or so. He attends Stanford University and UCLA, heads to Saudi Arabia as part of Operation Desert Shield and wins some medals, including a Purple Heart. He comes home and publishes a book about his experience, gets a job teaching high school history (during which his students name him Teacher of the Year), rides the dot-com bubble in Palo Alto, and sells his stocks to become a millionaire. Later, he returns to teaching and eventually contemplates running for office on a Democratic Party ticket. Along the way, his enigmatic father, who’s on the run from federal authorities, keeps showing up at opportune moments; as Dick (and Erickson) understates it, “his timing is almost supernatural.” Dick himself has telling encounters with a series of women named Amanda. There’s Amanda Patricia Nixon (no relation), a slightly unhinged college fling; Amanda Kristina, an ambitious lawyer and port-a-potty heiress (“her smile had a better chance of making the world safe for democracy than the rhetoric of Woodrow Wilson”); and the great love of Dick’s life, intrepid reporter Amanda Patina. Although Dick is a passionate, dedicated teacher—and the classroom sections of the book are the most heartfelt and gripping by a wide margin—he kicks off a campaign for office and insists on publishing the garish, often hilarious autobiography that forms the bulk of this novel. Along the way, the author combines highly effective Joseph Heller–style political and social satire with some surprisingly touching personal moments. Overall, Erickson welds all of these elements together into a hugely enjoyable comic novel.

A fast-paced, raucous tour through the last half-century alongside a modern-day Candide.