I have practiced law for over four decades. In 2017 I published my first novel, "Rivertown Heroes."

My fiction work has appeared in Streetlight Magazine, Adelaide Literary Magazine, American Writers Review, FRiGG Magazine, Penmen Review, and STORGY Magazine. My short story “The Cantor’s Window,” was acknowledged and anthologized as a Shortlist Winner Nominee in the 2018 Voices Literary Award for Short Stories by Adelaide Literary Magazine this February. Adelaide Books has contracted to release my collection of ten short stories under the title "The Three of Us" in late 2018.

I hold a BA from the University of Washington and a JD from Georgetown Law. I live with my family in the Pacific Northwest.

“Mike Cohen’s Rivertown Heroes is “recommended” reading: “A mystery in which melodrama reigns, with an admirably tenacious protagonist.” “The story has merit as a legal thriller…..Cohen ]the author[ slowly sets the hook for readers. Characters unhurriedly reveal rich backstories.” “But the genuine focus is on Nathan as a young man overcoming never ending hurdles. Watching him fight to earn respect within his family and as a lawyer is exhilarating,…””
– Kirkus Reviews 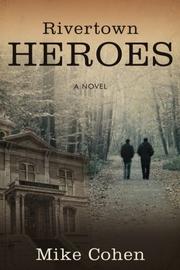 In Cohen’s debut thriller, a lawyer returns to his Washington hometown in the 1970s only to discover a swarm of illicit endeavors may be linked to his family.

Nathan Hirsch is a low-ranking but zealous attorney at a Washington, D.C., firm. Though he generally follows his boss’s script in the courtroom, Nathan takes an opportunity to branch out on his own. This unfortunately entails violating one of the firm’s policies and results in his termination. He retreats to Bethell, Washington, where his depressed mother rarely goes outside, having never recovered from the deaths of her older son, Ritchie, in Vietnam, and her husband, Leon, from a heart attack. Staying in Auntie Riva’s basement, Nathan has a chance to practice law again thanks to “Uncle” Harry King, a family friend and his parents’ lawyer. Nathan isn’t yet licensed in Washington state, but a judge allows him to act as public defender under Harry’s supervision. The same judge later pressures Nathan into representing Wally Richmond, a man arrested for burglary and the murder of “Uncle” Si Galitzer, another Hirsch family friend. Meanwhile, Harry, executor of Si’s will, enlists Nathan as his attorney. Harry anticipates that Si’s brother, Frank, will be in an uproar over a piece of the will, but Nathan wasn’t expecting the peculiarities surrounding Si. Digging deeper exposes a string of shady deeds and businesses as well as the possibility that Harry’s somehow involved. Cohen slowly sets the hook for readers. Nathan’s inevitable downfall in D.C., for one, isn’t a mere preamble but a meticulously drawn-out event. Characters unhurriedly reveal rich back stories, from Harry to Nathan’s D.C. boss, Lynn Reilly. The novel is unquestionably a murder mystery, and there are several suspicious characters. The most riveting is Ritchie. Nathan blames himself for events that drove his brother out of the family. This also ties to Katie, Ritchie’s girlfriend, currently in Bethell and seemingly harboring ill will toward Harry. Nathan’s lack of confidence often dulls the narrative. He sees himself as Reilly’s or Harry’s “puppet” and a lesser man than Ritchie. His keen observations, however, produce effervescent details: in Auntie Riva’s parlor, “the walls do not shake with the past chatter or the laughter that would make a place feel lived in, sounds you might expect to seep into the walls over generations and echo back across time.” The story has merit as a legal thriller; though few scenes take place inside a courtroom, Nathan successfully employs legal maneuvering (e.g., at a bank) to retrieve information. But the genuine focus is on Nathan as a young man overcoming never-ending hurdles. Watching him fight to earn respect within his family and as a lawyer is exhilarating, even before considering all the criminal goings-on.

A mystery in which melodrama reigns, with an admirably tenacious protagonist.

If we cannot find the truth, what is our hope of justice?